IMAGE: David Katoatau of Kiribati dances off the weightlifting platform after his effort in the Men's 105kg final at the Rio Games on Monday. Photograph: Stoyan Nenov/Reuters

David Katoatau got more cheers than any other lifter, including a Brazilian, throughout the men’s 105kg B Group.

Katoatau’s dances became a trademark of his victory in the Commonwealth Games in Glasgow, Scotland two years ago. That was the first gold medal in any global sporting event for his island nation of Kiribati.

He was also a social media sensation for his dancing as Kiribati’s flag bearer at the Rio Games’ opening ceremony.

Kiribati, located in the Central Pacific, is suffering “extreme coastal erosion not just of the beaches but also of the land” according to its government.

Some scientists have predicted a catastrophic effect on Kiribati’s 21 inhabited islands.

“Most people don’t know where Kiribati is,” Katoatau told Reuters.

“I want people to know more about us so I use weightlifting, and my dancing, to show the world.

“I wrote an open letter to the world last year to tell people about all the homes lost to rising sea levels. I don’t know how many years it will be before it sinks.” 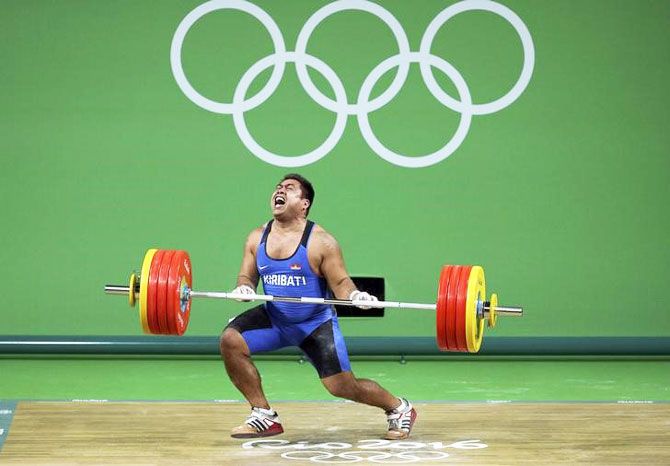 That letter was distributed at a Commonwealth Games Federation meeting by Katoatau’s coach, Paul Coffa.

“We don’t have the resources to save ourselves,” Katoatau said.

“There was no gym when I started training as a boy, and there is no gym now,” said Katoatau, 32.

“I trained on the beach in the open sun. The bar would become too hot to touch so I had to train at six in the morning.”

Katoatau moved to the Oceania Weightlifting Institute when he was 16 and has been coached by Coffa since then. He now lives and trains at the Institute in Noumea, New Caledonia in the South Pacific.

He has a coaching certificate and intends to team up with Coffa when his lifting days are over. His next target, though, is defending his Commonwealth title in Gold Coast, Australia, in 2018.

He won a state reward of A$11,000 ($8,400) for his Commonwealth gold and used it to build a home for his parents on Tarawa atoll, the most populated of Kiribati's more than 30 atolls and islands. The house was destroyed in a cyclone soon after its construction, he said.

“We have built another one, but it’s close to the sea so there is always a worry.”

Katoatau, who finished 15th in his 2008 Olympic debut, came in sixth in the B Group with 349kg, 1kg more than his Commonwealth Games effort.

He made his first five lifts but failed with the last one. He kissed the bar and danced off stage regardless, to the cheers of the crowd.

© Copyright 2021 Reuters Limited. All rights reserved. Republication or redistribution of Reuters content, including by framing or similar means, is expressly prohibited without the prior written consent of Reuters. Reuters shall not be liable for any errors or delays in the content, or for any actions taken in reliance thereon.
Related News: Kiribati, David Katoatau, Commonwealth Games Federation, Reuters, Paul Coffa
COMMENT
Print this article