Eric Abidal crowned a superb defensive display with a rare goal to help Barcelona to a 1-1 draw at Athletic Bilbao on Wednesday and put the La Liga leaders through to the quarter-finals of the King's Cup on away goals.

Barca joined holders Sevilla in the last eight after the Andalusians won their second leg at Malaga 3-0 in the earlier kickoff to cruise through 8-3 on aggregate.

Deportivo Coruna also advanced but came perilously close to elimination by second-division Cordoba before rallying to win 3-1 on the night and 4-2 over the two legs.

Bilbao held Barca to a 0-0 stalemate in last month's first leg at the Nou Camp and a hard-fought return match at the Basque club's San Mames stadium looked to be heading for extra time before the France international struck in the 75th minute. 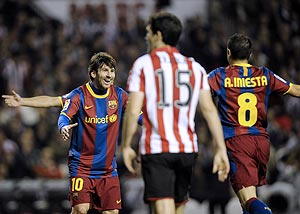 Spain playmaker Xavi picked out Lionel Messi in the penalty area and Abidal streaked in from the left wing to sidefoot the Argentina forward's pass powerfully past Gorka Iraizoz, his first goal for the club since joining in 2007.

Abidal had started the game in central defence and did an impressive job of keeping Bilbao's burly Spain striker Fernando Llorente quiet before switching to his normal left back slot.

Freed from Abidal's attentions, Llorente latched on to Andoni Iraola's through ball and slotted past Jose Manuel Pinto in the 85th minute to give the home side hope but a spell of late pressure failed to yield a goal.

Barca coach Pep Guardiola said it had been an honour to play a match of such intensity at the San Mames, where Bilbao's passionate fans create a dauntingly intense atmosphere.

"The fans should be very proud of the Athletic players and they should be of the fans," he said.

"There is a great deal of merit in coming here and knocking them out on their turf in a tie that was extremely close and I am very happy with my players for managing it."

Barca, the record 25-times winners who beat Bilbao 4-1 to win the Cup in 2009, will play La Liga rivals Getafe or second-division Real Betis in the last eight.

Madrid-based Getafe have the advantage for Thursday's return game after winning the first leg in Seville 2-1.

Sevilla, 2-0 winners against Atletico Madrid in last season's final, meet Villarreal or Valencia, who clash on Thursday after drawing 0-0 in Valencia.

Sevilla took the lead just after halftime in Malaga when a deflected long-range free kick from Ivory Coast midfielder Ndri Romaric flew into the top corner.

Substitute Diego Perotti turned in a Jesus Navas centre in the 65th minute to effectively snuff out Malaga's hopes of overturning their 5-3 defeat in last month's first leg and Malaga defender Weligton was dismissed in the 72nd after picking up a second yellow card.

Brazil striker Luis Fabiano curled in another free kick in the 89th to complete the rout.

Depor were held to a 1-1 draw in Cordoba last month and the Andalusians looked to be going through when captain Arteaga smashed the ball into the roof of the net in the 87th to make it 1-0 on the night and 2-1 on aggregate.

However, the referee ruled Jonathan Sesma had handled the ball in the penalty area two minutes later and Adrian Lopez stroked home the spot kick.

Cordoba were reduced to 10 men when defender Miguel Angel Tena was sent off moments later and Depor made the most of the advantage with Lopez scoring in each half of extra time.

Real Madrid have an 8-0 advantage over Levante for their second leg in Valencia on Thursday and coach Jose Mourinho has rested a host of first-team players, including goalkeeper and captain Iker Casillas and midfielder Xabi Alonso.

La Liga top scorer Cristiano Ronaldo is recovering from influenza and has also been left out of the squad.

© Copyright 2021 Reuters Limited. All rights reserved. Republication or redistribution of Reuters content, including by framing or similar means, is expressly prohibited without the prior written consent of Reuters. Reuters shall not be liable for any errors or delays in the content, or for any actions taken in reliance thereon.
Related News: Barca, Eric Abidal, Sevilla, Malaga, Athletic Bilbao
COMMENT
Print this article 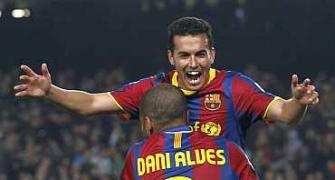 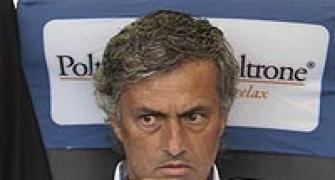