Some of the main points of the World Anti-Doping Agency (WADA) Independent Commission's (IC) report into allegations of widespread doping in Russian athletics.

The commission was set up after Germany's ARD television said in a documentary programme aired on December 3 last year that it had found evidence of systematic doping and cover-ups. 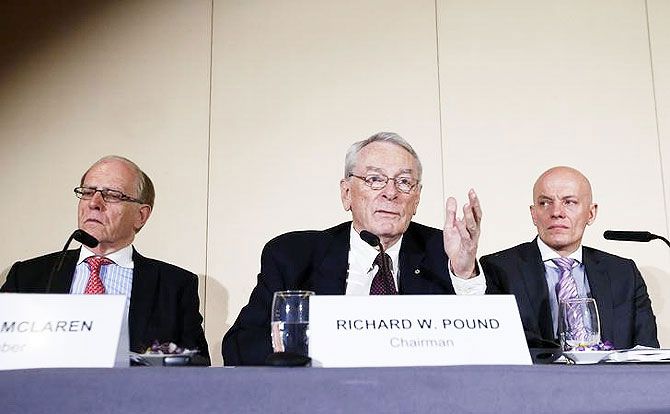 * The report recommended that the All-Russia Athletics Federation (ARAF) be suspended from international athletics.

* The IC said it had identified a "deeply-rooted culture of cheating"; exploitation of athletes; "consistent and persistent" use of performance-enhancing drugs by "many" Russian athletes; involvement by doctors, coaches and laboratory staff; and corruption and bribery "at the highest levels of international athletics".

* The report identified "systematic failures within the IAAF and Russia that prevent or diminish the possibility of an effective anti-doping programme".

* It found "organised efforts on the part of many senior coaches and officials, inside and outside Russia, to promote doping and make it possible for such efforts to be successful" and said that "evidence exists that confirms that coaches have attempted to manipulate or interfere with doping reports and testing procedures".

* A WADA audit team which visited the Moscow laboratory after the ARD programme was aired determined that 1,417 samples had been disposed of and removed. "This was done on a Saturday morning immediately prior to the arrival in Moscow of a WADA audit team," the report said.

* The presence of security services in the Moscow laboratory, and in the Sochi laboratory during the 2014 Winter Games, "actively imposed an atmosphere of intimidation on laboratory process and staff". It said: "The direct interference into the laboratory operation's by the RussianState significantly undermines the laboratory's operations.

* The WADA commission found "strong corroborating evidence" that the Moscow laboratory had been involved in a "widespread cover-up of positive doping tests".

* The report recommended lifetime bans against five athletes, four coaches and one doctor, not previously the subject of IAAF proceedings.

* According to the report, the Russian Anti-Doping Agency (RUSADA) "had a practice of providing advance notice of out-of-competition tests". This helped athletes avoid being tested, it said. Russian doping control officers "routinely accept bribes from the athletes, thereby ensuring the doping control test will not be effective" and also suffer the effects of "intimidation".

* The report listed numerous cases of athletes refusing to co-operate with IC investigators and that "coaches were complicit in attempting to prevent access to athletes for testing". Athletes were instructed to record information which was not true.

* Due to the general situation "an athlete's choice was frequently limited to accepting the prescribed and mandated doping regime or not being a member of the national team".