Kane tells Spurs he wants to leave club before Euros 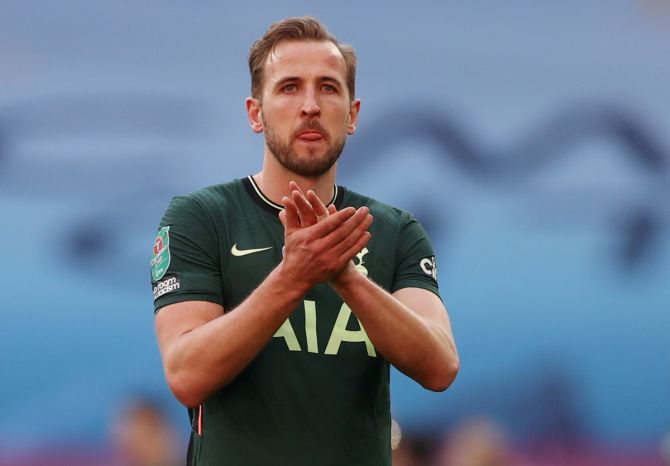 Tottenham Hotspur striker Harry Kane has informed the Premier League club of his desire to leave this summer, with the England international looking to resolve his future before next month's European Championship, Sky Sports reported on Monday.

Kane has a contract with the north London club until 2024, which could prove to be a stumbling block for a club looking to sign the 27-year-old who is valued at over 100 million pounds ($141.42 million).

Sky reported Manchester United, Manchester City and Chelsea have been in touch with Kane's representatives.

With 22 strikes and 13 assists, no player has been involved in more Premier League goals than Kane this season.

Kane is in the race for the Golden Boot, an award he has won twice before, with Liverpool's Mohamed Salah who has also scored 22 goals with two games left in the season.

Kane said last month he was frustrated at not winning trophies with Spurs even as the prolific striker continues to win individual accolades.

Spurs blew an opportunity to win their first trophy since 2008 when they lost last month's League Cup final to City.

Speculation about Kane's future increased after Spurs, who were top of the league in December, dropped down the standings due to a poor run of form, resulting in the club sacking manager Jose Mourinho.

Sixth-placed Spurs (59 points) have a slim chance of making the top four and qualifying for the Champions League but must rely on fourth-placed Chelsea (64) and Liverpool (63) dropping points.

Spurs host Aston Villa on Tuesday before a trip to third-placed Leicester City on the final day of the season.

Title-chasing Real Madrid will be without midfielder Toni Kroos for their must-win match against Villarreal on the final day of the Liga season after the German tested positive for COVID-19.

The club announced that Kroos returned a positive test on Monday, having missed Sunday's win at Athletic Club after coming into direct contact with someone who contracted the virus.

"Kroos has been in isolation since Friday May 14 after having come into direct contact with someone who tested positive for COVID-19."

Real Madrid are second in the standings, two points behind leaders Atletico Madrid, ahead of their decisive final game at home to seventh-placed Villarreal on Saturday.

Atleti travel to relegation-battling Real Valladolid at the same time, knowing a win would guarantee their first league crown since 2013-14.

Kroos has been a key member of Zinedine Zidane’s Real squad this term, scoring three goals in 42 games in all competitions.