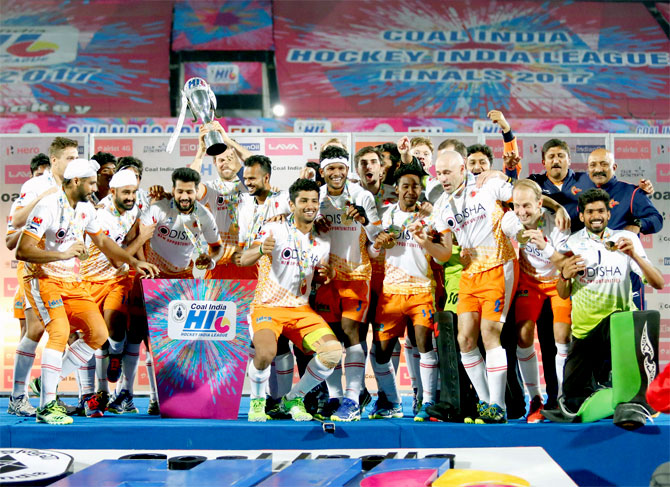 Skipper Moritz Fuerste led from the front with two goals as Kalinga Lancers thrashed Dabang Mumbai 4-1 in to win their maiden Hockey India League title, in Chandigarh, on Sunday.

Earlier in the day, Agustin Mazzilli scored a late field goal to help Uttar Pradesh Wizards register a 5-4 come-from-behind win over Delhi Waveriders and claim the bronze medal in the fifth edition of the tournament.

Trailing 3-4 with three minutes remaining in the game, the Argentine striker found himself at the right place at the right time to clinically finish Florent van Aubel's assist from a tight angle to hand UP Wizards the lead and their first podium finish in the history of the tournament.

It was action-packed first quarter of the final in which both the Lancers and Dabang Mumbai created real scoring chances but both the teams failed to make them count.

In their first final of the HIL,

it was Dabang Mumbai who were more assertive in the first quarter, but they failed to get past an alert Andrew Charter in front of Lancers goal.

The Lancers finally broke the deadlock in the 18th minute through tournament's highest scorer so far, Australian Turner, who found himself positioned to tap home a Mortuiz Fuerste pass from out side the D after it took a deflection from Lalit Upadhayay's stick.

A minute later, Dabang Mumbai secured a penalty corner but Charter stood like a rock in front of the Lancers goal to deny Harmanpreet Singh.

Dabang Mumbai captain Florian Fuchs then came tentalisingly close when he sprinted into the opposition circle, beating a host of defenders but his diagonal shot from the right went inches wide off the target even as a diving Gurjant Singh far away failed to get his stick.

Dabang Mumbai's Yousuf then set it up with a brilliant run for Manpreet Jr but the latter failed to keep his balance and unleashed a weak shot which was easily kept away by in-form Charter.

To add to Dabang Mumbai's woes, Aran Zalewski won a penalty corner for the Lancers just at the stroke of half time and skipper Moritz Fuerste made no mistake in sending his flick into the centre of the net past FIH's Goalkeeper of the Year, Harte.

Three minutes into the third quarter Kieran Govers' secured a penalty corner for Dabang Mumbai and Yousuf reduced the margin for his side with the help of a fine variation.
Source: PTI© Copyright 2021 PTI. All rights reserved. Republication or redistribution of PTI content, including by framing or similar means, is expressly prohibited without the prior written consent.
Related News: Dabang Mumbai Affan Yousuf, Kalinga Lancers, Hockey India League, Moritz Fuerste, FIH
COMMENT
Print this article