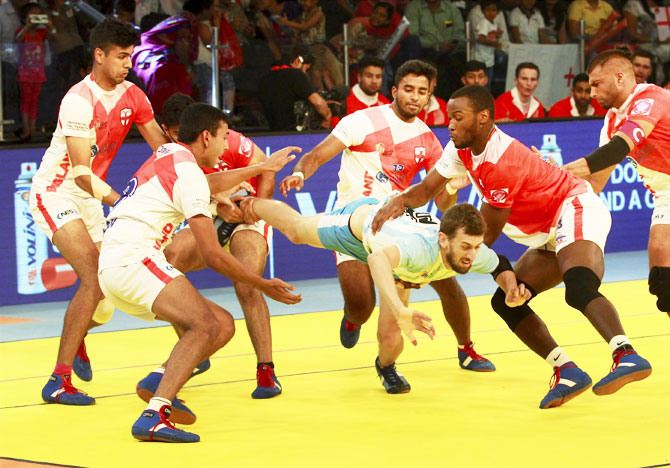 A terrific raiding performance by England saw them record a comfortable 68-28 win over Argentina in the Group A clash of the Kabaddi World Cup at the The Arena by TransStadia` in Ahmedabad on Friday.

Tope Adewalure led from the front and scored 19 points to lead England to a comfortable win. Keshav Gupta and Someshwar Kalia chipped in with 10 and 13 points respectively as England dominated the match with five all outs.

It was 1-1 in the second minute as Argentina got a raid point whereas England responded with a tackle point.Adewalure scored two points in the second minute and was immediately sent to the bench by Mariano Pasqual as Argentina trailed 2-3. England led 7-3 after six minutes as Adewalure earned a quick bonus point. Argentinian defence scored their second point in the ninth minute as they trailed 5-9.

Keshav Gupta scored with a two-point raid in the 10th minute to give England 12-5 lead. Adewalure scored two points as England inflicted an all out in the 11th minute to lead 16-6. England began to assert their supremacy as the match went on as their defence tightened the noose on Argentinian raiders. Argentina relied on bonus points in the first half and scored just two touch points.

Argentina began the second half in better form and scored three points in two minutes to trail 12-34. But Tope Adewalure was in excellent raiding form and scored his 14th point as England led 38-14 after 24 minutes. Argentina suffered the third all out of the match as they trailed 14-42 after 25 minutes.

England were relentless and punished Argentina's silly defensive errors to lead 50-16. Argentina forced a super tackle in the 30th minute to senAdewalure to the bench as they trailed 18-50. Adewalure scored two more points in 32nd minute as England inflicted the fourth all out to lead 56-20.

Argentina forced a super raid in 35th minute with Jorge Barazza scoring three points as they trailed 25-57. Keshav Gupta achieved a super 10 and made a crucial contribution in England's victory. England led 66-26 as they inflicted another all out on Argentina in the 39th minute. Argentina gave away far too many easy points and England made them suffer as they won 68-28.

It was Argentina's third successive defeat and the third time they conceded 68 points in a match, as they remain bottom of the table. England moved to third place in Group A with 10 points from three matches.

Poland scripted history as they thrashed USA by a huge margin 75-29 to register their first win of the ongoing Kabaddi World Cup at the iconic stadium `The Arena by TransStadia` on Friday.

Skipper Michal Spiczko led from the front and scored 16 points for Poland. Poland's victory margin was the biggest by any team in the World Cup so far.

Poland made a swift start and led 7-2 after four minutes but USA responded with a super tackle to make it 4-8 in the fifth minute. Polish defence was in terrific form as they inflicted an all out in the sixth minute to lead 13-4. Michal Spiczko scored four points in six minutes for Poland. None of the US raiders scored in the first eight minutes as they struggled to cope with strong Polish defence. Spiczko scored his sixth point in the ninth minute as Poland led 19-6.

Poland inflicted the second all out in the 11th minute to lead 24-6 as they were making little work of an out-of-sorts US side. USA picked up their first raid point in the 12th minute as Troy Bacon opened his team's account with a two-point raid. The US defence had scored just two points each in their previous two games but they put in a much-improved performance. Spiczko, meanwhile, continued to snare raid points and scored his ninth point in 14th minute.

Dylan Banks came up with a super raid in the same minute as USA trailed 12-28. Poland forced a super tackle in the 16th minute to lead 30-13. PiotrPamulak scored four quick points in two minutes as Poland led 34-14 after 19 minutes. USA did try to make a fight of it in the first half but Poland inflicted another all out in the last seconds of first half to lead 40-14 at the break.

The second half started with Poland raiders scoring four points in the four minutes to lead 45-14. USA forced two super tacklesin the space of 90 seconds as they trailed 18-46 after 26 minutes. Spiczko scored two more points in 29th minute as Poland inflicted the fourth all out to lead 54-19. Poland were head and shoulders above USA as four minutes later they inflicted another all out to lead 63-20.

Poland continued to score points with ease in the last few minutes of the match. Sixth all out of the match was inflicted as Spiczko scored two more points to give Poland 73-22 lead. Poland recorded the maximum points by any team in the 2016 World Cup. USA would take a lot of heart from their defensive performance as Kevin Caldwell and Ronald Fields scored 11 tackle points combined. Dylan Banks scored four points with a super raid in the dying seconds and ended with eight points for USA. Poland, however, were too good for USA and crushed USA 75-29.

With the result, the USA remains winless and are bottom of Group B whereas Poland are fifth. Neither team have any hope of making it to the World Cup semi-finals.