Juventus winger Simone Pepe and his manager Antonio Conte's technical assistant Cristian Stellini are among the latest names to be called for questioning on Thursday in the match-fixing trial that has rocked Italy.

Thirty seven people have so far been called up by federal prosecutors in the second round of "calcioscommesse" (soccer bet) investigations, which has led to the arrest of several high-profile players, including Lazio captain Stefano Mauri.

In addition to the arrests, a police raid of Italy's pre-Euro 2012 training camp led to defender Domenico Crescito being dropped from the squad after he was put under an official police investigation.

Stellini also worked under Conte during his time at Siena in the 2010-11 season, when the pair led the Tuscan side to promotion to Serie A. 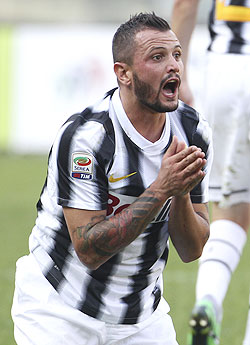 In April, it was reported that Filippo Carobbio, who played under them during that season, claimed that both Conte and Stellini were aware of at least one match being fixed for a betting syndicate.

It is not yet clear why Pepe, who did not make the Italy squad for the Euro 2012 tournament starting on Friday, has been called by prosecutors, but the pair will be questioned on June 13.

The latest Italian soccer scandal led Prime Minister Mario Monti to suggest it might be a good idea to suspend soccer for two years and national team coach Cesare Prandelli admit that he would have no problem if his side were kicked out of Euro 2012.

The first round of sentence recommendations saw Pescara and Atalanta handed two-point deductions for next season, while Sampdoria and Siena were handed 50,000 euro fines and relegated Serie B side AlbinoLeffe a whopping 27-point deduction.

"There should be zero tolerance for anyone found to be guilty - they should never play again," the French former Juventus midfielder said at a news conference on Wednesday.

More revelations look set to emerge with ANSA reporting that prosecutors in Cremona have "devastating" information regarding the 2011 Sampdoria v Genoa derby, in particular for former Genoa player Omar Milanetto, now at Serie B side Padova.

"It will have a devastating effect and Milanetto is involved," says a document which the Italian news agency claims is a transcription of prosecutor Roberto di Martino's words from May 8.

"It will be the worst thing to come out so far in this investigation."