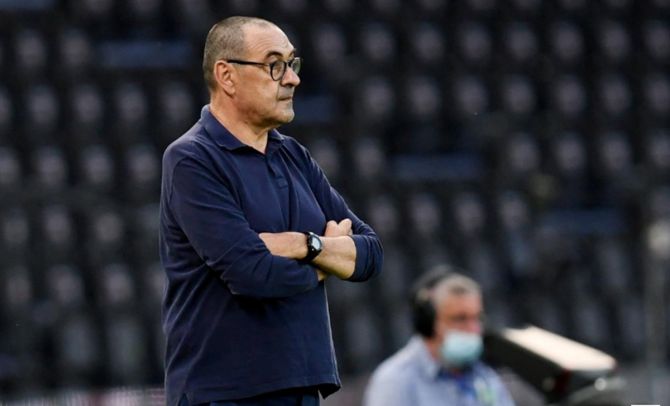 IMAGE: Juventus won Serie A for the ninth season in a row last month but were knocked out of the Champions League. Photograph: Jennifer Lorenzini/Reuters

Serie A club Juventus have sacked coach Maurizio Sarri after one season in charge, following the team’s elimination from the Champions League in the round of 16 on Friday, the Turin club said in a statement.

The 61-year-old was dismissed despite leading Juventus to the Serie A title two weeks ago, their ninth in a row.

“Juventus Football Club announces that Maurizio Sarri has been relieved of his post as coach of the First Team,” the club said on its website.

“The club would like to thank the coach for having written a new page in Juventus’ history with the victory of the ninth-consecutive championship, the culmination of a personal journey that led him to climb all the divisions of Italian football,” it added.

Sarri had been under pressure since his side lost to Napoli on penalties in the final of the Coppa Italia in June.

Juventus have become so dominant in Serie A in the last decade that winning the domestic league is regarded as almost an obligation, while the Champions League - which the side have not won since 1996 - is regarded as their main target.