Mumbai's boys and girls' teams bowed out of the 35th Junior (under-20) National Hockey Championships in contrasting fashion on Saturday.

In the tournament, being organised by the Pune District Hockey Association, in association with the Pimpri-Chinchwad Municipal Corporation, under the auspices of the Indian Hockey Federation, the Mumbai boys went down fighting to a plucky Karnataka 1-2 in a pre-quarter-final match while the girls were squarely beaten 6-1 by Punjab in a quarter-final, played at the Major Dhyanchand ground, Pimpri-Chinchwad, Nehrunagar.

Mumbai paid dearly for not capitalizing on the chances that came their way and conceding two soft goals. They did well to take the lead, when penalty-corner specialist Narad Bahadur converted a penalty-corner in the 19th minute. However, their joy was short-lived as Karnataka pulled a goal back through Bopanna C V in the 22nd minute before Vinayak K Bijwad made the most of a defensive lapse to snatch the winner in the 40th minute.

Mumbai went all out in search of the equaliser and even earned a couple of penalty-corners but without success.

Earlier, the girls were unable to match the performance of the Punjab outfit and surrender meekly.

In the morning, the Delhi lads also paid the price for their prodigality in front of the goal as they went down fighting 3-4 to Uttar Pradesh in another pre-quarter-final encounter. 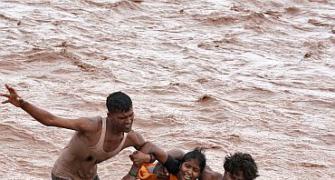 Floods! Army out in Haryana
Goods train derails in UP, rail traffic affected