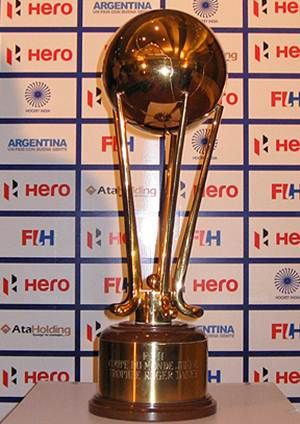 India put up a gallant fight before going down 2-3 to the Netherlands in their opening match of the Hero FIH Junior hockey World Cup, in Delhi, on Friday.

The home side conceded three field goals in the opening half as the Netherlands scored twice through Milan van Baal (3rd minute, 28th) and once through Mark Rijkers (25th).

The Indians started on a bright note but as time progressed fizzled out, allowing the Dutchmen to take control over the proceedings.

The Netherlands stunned the handful of cheering home supporters present at the floodlit Major Dhyan Chand National Stadium on a chilly evening by scoring the first goal in the third minute from their first attack.

Milan van Baal sounded the board from close range after receiving a pass from Tom Hiebendaal.

The Indians had an opportunity to equalise in the next minute from their first penalty-corner but Sukhmanjit Singh faltered.

They, however, equalised soon from their second one, which was perfectly converted by Gurjinder Singh.

But the home team’s joy was shortlived as the Netherlands pumped in two quick field goals, courtesy some sloppy work at the back by the Indians, to silence the crowd.

Mark Rijkers first scored with a fierce reverse hit after pouncing on a loose ball inside the circle and then, three minutes later, an opportunist Van Baal made the scoreline 3-1 after tapping home a rebound as the Indians were guilty of committing hara-kiri inside their circle.

Just five minutes from half-time, the Netherlands earned their first penalty-corner but wasted the opportunity as India went into the breather trailing 1-3.

The Indians looked more sharp and effective after the change of ends. Trailing by two goals, India had no other option but to attack from the onset and the home team players did just that.

It did not take long for them to pull one back as Akashdeep scored a brilliant field goal to raise the tempo of the match.

Ramandeep Singh sent an aerial ball on top of circle which Akashdeep received. He then dodged the surging Netherlands goalkeeper, Piet Noordam, who tried to block, and scored with a diagonal reverse hit from an acute angle.

Buoyed by the goal, the Indians went on the offensive and put pressure on the Netherlands defence with relentless attacks. However, the Dutch defence stood tall.

Man-to-man marking was the highlight of Netherlands game as they did not give much space to the Indian forwards to create clear scoring chances.

India next plays Canada in a must-win game on Saturday, while the Netherlands are up against Korea.

Meanwhile, in other matches of the opening day, Pakistan survived a late scare before prevailing over lowly Egypt 3-2 in Pool A, while France defeated Spain by identical margin in Pool B.

In the opening round matches of Pool D, an impressive Malaysia eked out a fighting 3-2 win over New Zealand while South Africa beat England 2-1 to register their first win in the tournament.

The mighty Germans were in for a rude shock as Belgium took the lead in the 30th minute through a field goal from Maxime Capelle to seize the initiative in the opening half.

They shocked the Germans again when Arthur van Doren doubled the lead in the 45th minute through another field strike.

Germany livened up the match eight minutes from the hooter when Christopher Ruhr converted a penalty-corner before Alexandre vn Linthoudt sealed the match for Belgium with another field goal in the final minute of the game.

Australia were by far the dominant side as they scored as many as five goals through Justin Douglas (7th minute), Frank Main (16th), captain Daniel Beale (23rd) and Casey Hammond (49th), while the other came from a penalty-corner conversion by Jeremy Hayward (49th).

For Argentina, Joaquin Leonel Coelho (31st) scored through a field effort while captain Gonzalo Peillat converted a penalty-corner in the 62nd minute.

Meanwhile, in the opening match of the day, which turned out to be a high-scoring encounter, Korea thrashed Canada 7-4.

For Canada, who produced a lacklustre performance in the opening half, Vikramjeet Sandhu (22nd), Gordon Johnston (52nd), Jannu Mahal (58th) and Oliver Scholfield (59th) were the goal-getters.