Indian boxers continue to show their prowess on the international stage. This time it was youngsters Aditya Maan and Ashish who made the country proud at the AIBA Junior World Boxing Championships in Kiev, Ukraine.

Maan (66kg) and Ashish (63kg) punched their way into the quarter-finals of the competition in contrasting fashion. 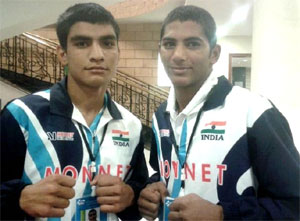 Maan, also a bronze medal winner at the Junior Continental Championships earlier this year, made his place in the pre-quarters beating Hungarian boxer Laszlo Kozak in what was a close contest.

In the round of 16, Maan started strongly against Javier Estrada from the USA. The Indian gained a clear advantage and put Estrada on the back-foot with some cracking straight punches.

He did not allow his opponent to come close and went on to win by virtue of a unanimous decision.

In the quarters, he will meet Cassio Olivera Santos from Brazil.

In the light welterweight division, Ashish, playing his first international tournament, created a flutter in his opening round bout getting rid of Marcel Rumpler from Austria in the second round winning by virtue of a RSC OC decision (Referee Stopped Contest – Outclassed).

In the pre-quarter finals, the 15-year-old from Chandigarh once again gave a good account of himself as he notched up a unanimous victory against Jegors Artjomovs of Latvia. In the quarter-finals, he will take on Shabbos Negmatulloev of Tajikistan.

But it was disappointment for 2013 Junior Asian Championship bronze-medallist Vishnu Dayanand Chayal (57kg) -- the third Indian to have made a place in the pre-quarters of the championship -- as he ended up on the losing side.

In the featherweight category Vishnu's campaign ended at the hands of English boxer Dalton Smith.

But the 16-year-old Indian put up strong show against some quality boxing from the Brit, in the end though he lost by just one point.

The other big disappointments for India came with the ouster of reigning Asian lightweight Champion Prayag Chauhan (60kg), who lost his opening bout to Muzaffar Rashidov from Uzbekistan and in the light flyweight division Gaurav Solanki also lost in the opening round against Han Younghun of Korea.