IMAGE: Germany's players celebrate after scoring early against India in the semi-finals of the Junior Hockey World Cup in Bhubaneswar on Friday. Photograph: Hockey India

Defending champions India's dream of a second consecutive FIH Junior Men's Hockey World Cup title was shattered after a 2-4 defeat to six-time winners Germany in the semi-finals, in Bhubaneswar, on Friday.

The Germans will take on Argentina in the final.

The Indians, who last won the Junior World Cup title in Lucknow in 2016, were a pale shadow of themselves against Germany, who scored four times in the first-half through Erik Kleinlein (15th minute), Aron Flatten (21st), skipper Hannes Muller (24th) and Christopher Kutter (25th) to sink the home side.

India will play France in the third-fourth place classification match on Sunday, before the final.

India had earlier lost 4-5 to France in the pool stages.

The Indians' game on Friday was in stark contrast to the way they played against Belgium in the quarter-finals. While their defence was extraordinary in the last match, it was caught napping by the Germans on Friday. Besides, there was no cohesion between the midfield and forward line.

The Germans were the better side on display in the first quarter and pressed the Indian defence from the word go. Maximillian Siegburg missed a golden opportunity to take the lead for Germany as he failed to connect a loose ball at the far post with an open goal in front.

In the next minute Germany secured their first penalty-corner but India goalkeeper Prasanth Chauhan made a fine save.

Instead of going full throttle, India preferred to play half-press and utilised the flanks to build their attacks, but they faltered in stopping and trapping the ball in wet pitch conditions.

Germany, instead, played better under the constant drizzle compared to the hosts and took the lead just 25 seconds from the end of the first quarter.

Kleinlein scored from a rebound from Germany's second penalty-corner after the initial flick was saved by Prasanth.

Five seconds from the first break India secured a penalty-corner but vice-captain Sanjay Kumar failed to find the back of the net.

Germany continued to press for the second goal and dominated the proceedings in the second quarter too.

Six minutes into the second quarter Germany again caught the Indian defence napping and doubled their lead through Flatten.

Minutes later the Germans surged 3-0 ahead when skipper Muller found the back of the Indian net to the right of Pawan with a reverse hit from the top of the circle. 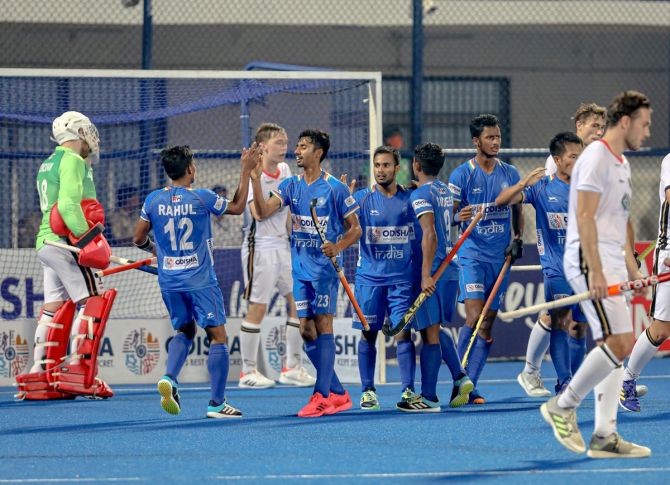 IMAGE: India's players celebrate after pulling a goal back against Germany in the semi-finals. Photograph: Hockey India

India responded immediately and pulled a goal back through Uttam, who tapped in Rahul Kumar Rajbhar's cross from the left flank.

But India's joy was shortlived as they conceded another penalty-corner seconds later, which resulted in a penalty stroke, and Kutter made no mistake from the spot as Germany led 4-1 at half-time.

Trailing by three goals, India tried to press hard after the change of ends but the German defence stood tall.

While India created a few good moves in the third quarter, the finishing was not up to the mark.

In the 42nd minute, Rajbhar found himself in a scoring position but Germany ‘keeper Anton Brinckman came out of his line to close down the angle.

With four quality-penalty corner specialists in the side, India's weapon was set-pieces but the German defence conceded just one to take that factor out of the contest.

Instead of trying to earn penalty-corners, the Indian players were guilty of holding on to the ball and dribbling too much inside the opponent's circle.

Germany secured a set-piece in the 52nd minute but failed to convert.

There was some consolation as Dhami scored just seconds from the final hooter to reduce the margin but, by then, Germany sealed the issue.