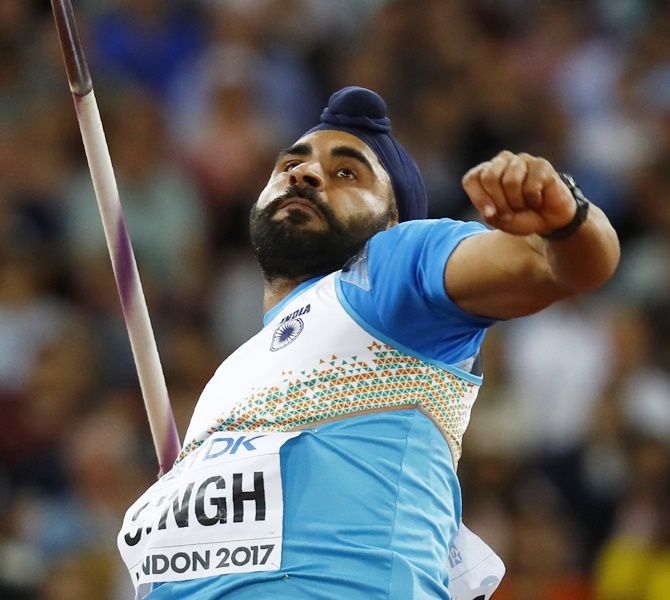 Top Indian javelin thrower Davinder Singh Kang has been suspended provisionally by the world athletics governing body after he returned positive for a steroid in an out-of-competition test last week.

The 29-year-old Kang's dope sample was taken by the officials of the Athletics Integrity Unit (AIU), the IAAF's new anti-doping body which started operations last year, four days ago in Patiala. It was found to contain a banned steroid and Kang now faces the prospect of being banned for four years. In that case, his career could well be over.

The AIU officials tested Kang at a time prescribed by him under the "whereabouts" clause of the WADA Code as he is one of the five Indian athletes placed in the IAAF Registered Testing Pool.

Kang's dope failure was intimated to the Athletics Federation of India by the IAAF Tuesday and his name was immediately removed from the starting line-up of men's javelin throw at the Indian Grand Prix held at the National Institute of Sports in Patiala.

"The athlete gave the timing window of 10am to 11am on that particular day (four days back) in his 'whereabouts' information. The AIU people came to Patiala and took his sample and that contained a banned steroid. He is now provisionally suspended," an official of the AFI said on condition of anonymity.

Last year, the Punjab athlete had also tested positive for marijuana, traces of which were found in his urine sample collected by the National Anti-Doping Agency officials during an Indian Grand Prix event in New Delhi in May last year.

Kang, a medal prospect in the Commonwealth Games and the Asian Games this year, was not suspended by the NADA at that time, since marijuana falls under the "specified substance" category in the World Anti-Doping Agency’s (WADA) prohibited list of the performance-enhancing drugs.

He took part in the 2017 World Championships in London and became the first Indian to reach the javelin throw final round in a World Championship. He was training under German legend Uwe Hohn at NIS Patiala, and was preparing for the Commonwealth and the Asian Games.

This latest case though has nothing to do with NADA and his earlier marijuana case.

"This case will be dealt by the IAAF only. He will have to present his case in front of the AIU, an independent body set up by the IAAF," the official said.