Newspaper poll published showed 63 per cent of people across Japan said the games should be postponed, while 23 per cent said they should be held as planned 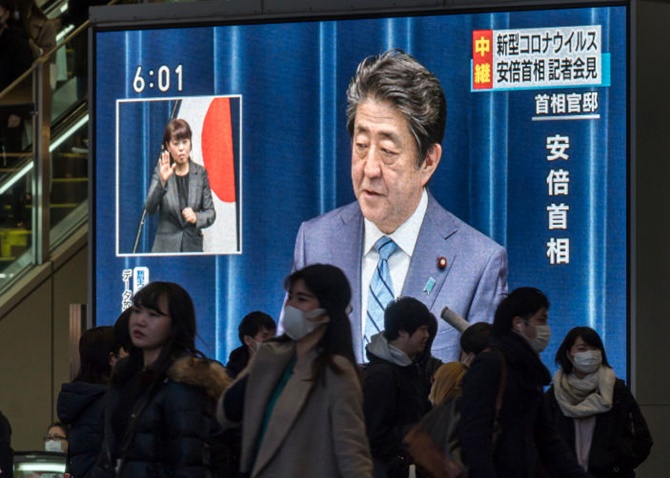 Japanese prime minister Shinzo Abe said, on Tuesday, that Group of Seven leaders had agreed to support a 'complete' Olympics, but dodged questions about whether any of the leaders had brought up the possibility of postponement.

His comments come as concerns mount about whether the Games can proceed as planned now that the rapidly spreading coronavirus pandemic has brought business and social activity in many countries to a standstill and panic to financial markets.

A fresh domestic poll showed most Japanese believe the Games should be postponed.

In a unprecedented meeting with other G7 leaders by video conference to discuss the coronavirus pandemic, Abe said he had told them: "We are doing everything in our power to prepare (for the Games), and we want to aim for a complete event as proof that mankind can defeat the new coronavirus."

When pressed at a briefing about whether there had been discussion of a delay, Abe repeated the same line.

But Chief Cabinet Secretary Yoshihide Suga also dodged a question about the timing of the Games, repeating the government's stance that it continued to work with the International Olympic Committee, organising members and the Tokyo government on preparations.

At the G7 video conference, leaders committed to doing 'whatever is necessary' to battle the coronavirus pandemic and to work together more closely to protect public health, jobs and growth, and issued a statement promising to address the health and economic risks.

The virus has infected almost 180,000 people and killed over 7,000 worldwide, with the epicentre now in Europe. Sports competitions have come to a halt in Europe, hampering athletes' preparations.

Further stoking those concerns, the head of the French Olympic Committee said on Monday the pandemic must have reached its peak and be on the wane by the end of May for the Tokyo Olympics to be staged on schedule.

US president Donald Trump has said the worst of the virus could be over by July or August, a more specific and lengthier time frame than he has previously suggested.