Jankovic undecided on future after comeback at Djokovic event 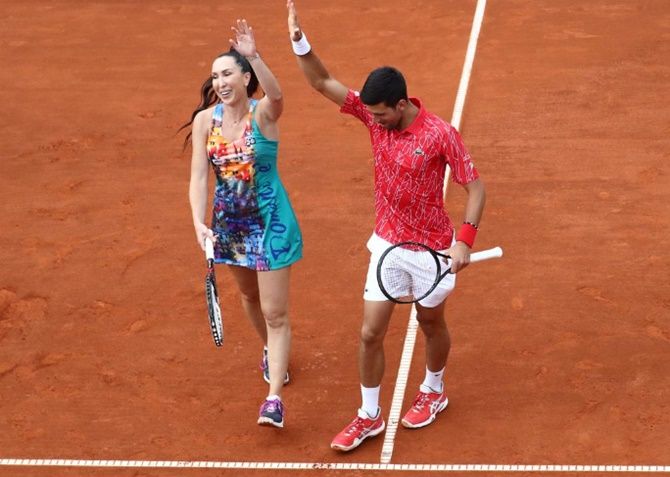 Former world number one Jelena Jankovic is still unsure whether she would resume her tennis career after playing for the first time in nearly three years at fellow Serb Novak Djokovic’s charity tournament on Friday.

Jankovic, who ended the 2008 season at the top of the WTA rankings but had not played since her first-round defeat by Czech Petra Kvitova at the 2017 US Open, acknowledged she spent the last three years in tennis wilderness.

“This is the first time I’ve held a tennis racket in a very long time and I was as overjoyed as a child in a candy shop,” the 35-year-old told a news conference.

“It felt like the very first time. I was sidelined by a back injury which not only hampered my tennis career, it was so bad I couldn’t walk properly or sleep.

“I’ve made a full recovery but I don’t know if this is a comeback. The door is open, I never officially retired but I am living a different life now.”

Jankovic teamed up with men’s world number one Djokovic at his tennis complex in Serbia’s capital and beat the duo of Serbia’s Davis Cup captain Nenad Zimonjic and 19-year-old prospect Olga Danilovic 7-6 in a mixed doubles contest.

The match was a prelude to June 13-14 charity event hosted by Djokovic, also including Alexander Zverev, Dominic Thiem, Grigor Dimitrov and several other players.

Though out of practice, Jankovic drew plenty of cheers from a crowd of 2,000 who turned up at the compound by the Danube river in central Belgrade.

Although the one-set contest lacked a competitive edge, the rivals produced plenty of entertainment with a flurry of badminton-styled exchanges on the net with Jankovic showing glimpses of her old self.

“It was amazing,” she said. “But making a tour comeback is a very different matter and a painstaking process.”