'It's a special night, very special' 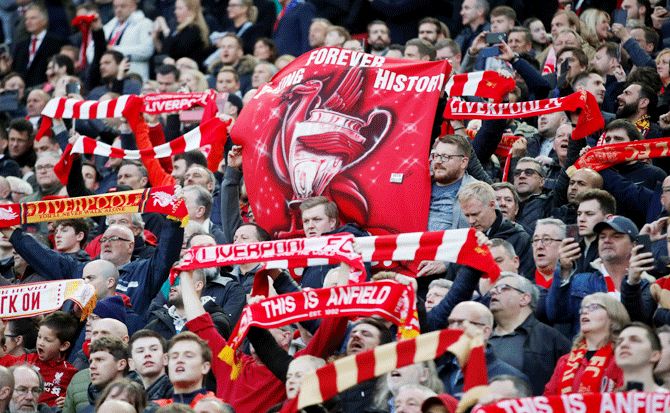 IMAGE: Liverpool fans in the stands during the match against Barca at Anfield on Tuesday. Photograph: Carl Recine/Action Images via Reuters

Liverpool manager Juergen Klopp said the 4-0 win over Barcelona on Tuesday was "unbelievable" and paid tribute to the belief his players had shown to secure the shock 4-3 aggregate win and a place in the Champions League final.

The German was clearly swept up in the emotion at the end of the game as a delirious Anfield crowd sang the club's anthem "You'll never walk alone" with the players lined up in front of the Kop.

"When I saw the boys after the game and saw the tears in their eyes, that’s football and they are professionals and it’s still like this," said Klopp.

"This club touches you like crazy, it’s like you feel much more than others in these moments. It’s really great, I love it.

"We had to score four goals and (were) not allowed to concede. That made it, again, more difficult. So we didn’t really think about it, to be 100 per cent honest.

"We tried to build on the performance at Barcelona, all the good things we did there, and tried to win the game step by step.

Liverpool took a seventh minute lead through Divock Origi and then struck twice after the break courtesy of substitute Georginio Wijnaldum before Origi got the crucial fourth goal.

Throughout the match, Liverpool played with pulsating energy and gritty determination, while still being able to carve open a trembling Barcelona defence.

"What the boys did -- this mix, again, of big heart and football skills -- is unbelievable," Klopp added.

"But ... we didn’t learn it in the first game, we knew it before already.

"I said to the boys before the game, 'I don’t think it’s possible but because it’s you I think we have a chance' -- is because they are really mentality giants.

"It’s unbelievable after the season we played, the games we had, the injuries we have now in this moment."

The German said few would have believed his team could get the result the needed to reach the final, where they will play Ajax Amsterdam or Tottenham Hotspur.

"If you go out there and ask who bet a penny on us, I don’t think you’ll find a lot of people. And then going out there and putting (in) a performance like this on the pitch is unbelievable," he said.

"I’m really proud to be the manager of this team. What they did tonight is so special and I will remember it forever. I don’t know if it happened before and I don’t know if it can happen again. The boys did it and it was brilliant."

Liverpool's centre back Virgil van Dijk has said that the team feels like they can beat anyone in the world.

"It's going to be a tough game for both of them on Wednesday (Ajax FC and Tottenham Hotspur) and we'll just see who is going to come to Madrid and we prepare," he added.

Van Dijk was instrumental in Liverpool's win over Barcelona as he helped the team in keeping a clean sheet in the 4-0 win.

The Reds had lost the first-leg 3-0 against Barcelona and had a mountain to climb in the second leg. But the team put up a huge effort to win the second leg 4-0, winning the semi-final on aggregate 4-3.

Ajax and Tottenham would take on each other in the other semi-final to decide who faces Liverpool in the finals of the tournament.

Ajax currently holds a 1-0 lead over Tottenham as they defeated them in the semi-final first leg.

Tottenham have proved to be giant killers in the tournament as they knocked out both Real Madrid and Juventus to reach the semi-final stage.

Ajax takes on Tottenham in the semi-final second leg of the Champions League on Wednesday. 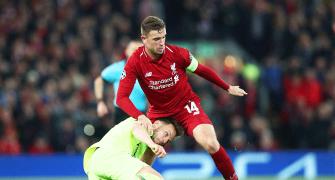 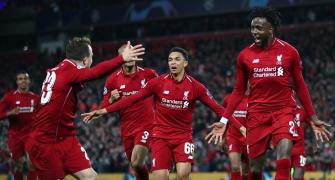