Luca Toni, who was part of Italy’s World Cup winning side in 2006, has confirmed he will hang up his boots at the end of the Serie A season. 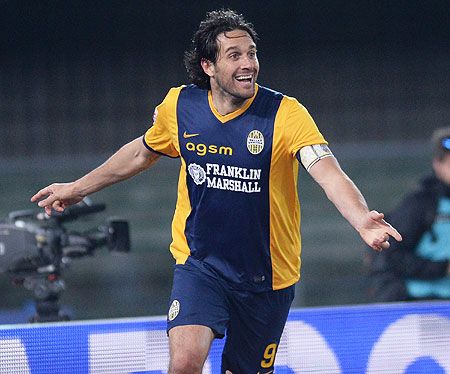 “I think the time has come to stop,” Toni told Sky Sport Italia after Verona’s 1-0 home loss to Empoli on Sunday.

“I hope to celebrate it by keeping Verona safe in Serie A.”

The 38-year-old striker will have a job on his hands to keep his last club in the Italian top flight as they are rooted to the bottom of the league with six points from 15 games and still waiting for their first win.

Toni, who started his professional career at Modena in 1994, claimed the Golden Boot as Europe’s highest goalscorer in 2006 and played for 13 different Italian sides including Roma, Palermo, Juventus, and Fiorentina.

He also had stints at Bayern Munich and UAE side Al-Nasr.

Toni was Serie A's top scorer in the 2005-06 campaign with Fiorentina and last season with Verona, when he became the oldest player to top the scoring charts.

© Copyright 2022 Reuters Limited. All rights reserved. Republication or redistribution of Reuters content, including by framing or similar means, is expressly prohibited without the prior written consent of Reuters. Reuters shall not be liable for any errors or delays in the content, or for any actions taken in reliance thereon.
Related News: Luca Toni, Hellas Verona, UAE, Fiorentina, Sky Sport Italia
COMMENT
Print this article