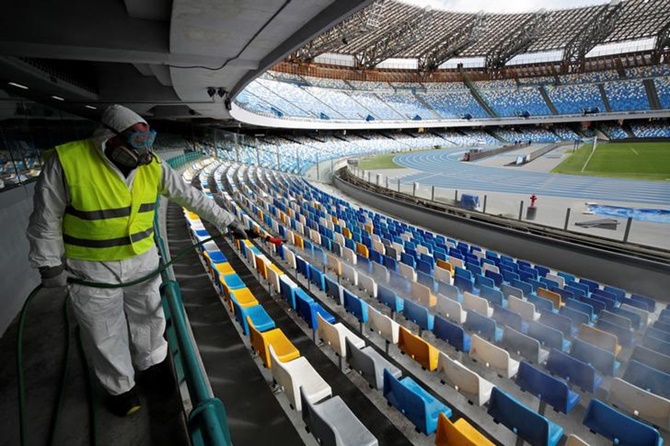 IMAGE: A cleaner wearing a protective suit sanitises seats at the San Paolo stadium ahead of the second leg of the Coppa Italia semi-final between Napoli and Inter Milan, which has since been postponed as part of measures to contain the coronavirus outbreak, in Naples, Italy. Photograph: Ciro De Luca/Reuters

Italy's top sports body on Monday called for all sports events to be cancelled until April 3, and asked the government to issue a decree to enforce the measure as the country fights with the worst coronavirus outbreak in Europe.

After a meeting between representatives from all Italian team sports federations, the National Olympic Committee (CONI) said in a statement the government should intensify its measures against the virus.

"Health protection is the top priority for everyone," the statement said.

It added there was a unanimous agreement that sporting activity at every level should be suspended until April 3.

However, the statement noted international competitions, for both clubs and national teams, do not fall within CONI's jurisdiction and so can't be influenced by its decision.

This includes UEFA soccer tournaments such as the Champions League, in which Italy's Serie A leaders Juventus are set to host France's Lyon on March 17, and the Europa League, in which Inter Milan and AS Roma have home games scheduled against Spain's Getafe and Sevilla on March 12 and 19 respectively.

The government had already ordered that all sporting events, including Serie A matches, must be played behind closed doors to avoid crowds of people that could boost the contagion.

The closed-doors games at the weekend caused chaos, with Italy’s sports minister Vincenzo Spadafora calling Serie A organisers “irresponsible” after they ignored a late call from the players' union for the day’s matches to be suspended, which saw Parma’s clash with SPAL delayed by 75 minutes.

The previous two rounds of fixtures were heavily disrupted by the spread of the virus as several games were suspended.

Cases of coronavirus in Italy have now risen to 7,375, with 366 deaths, the highest number outside of China.

© Copyright 2020 Reuters Limited. All rights reserved. Republication or redistribution of Reuters content, including by framing or similar means, is expressly prohibited without the prior written consent of Reuters. Reuters shall not be liable for any errors or delays in the content, or for any actions taken in reliance thereon.
Related News: CONI, Italy, Inter Milan, SPAL, UEFA
SHARE THIS STORYCOMMENT
Print this article 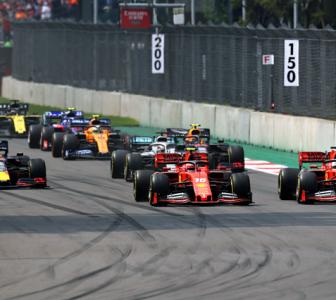 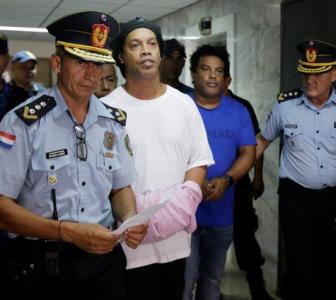