Second-placed Juventus, who host Inter next Saturday, lost 2-0 at Cagliari despite dominating for long periods. 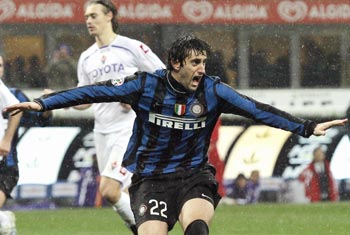 Champions Inter, chasing their fifth straight scudetto, thought they had gone ahead early in the second half when Walter Samuel's header was controversially ruled out for shirt tugging.

"I have just one duty -- to be honest. I don't need to win anything, not the championship, not the Champions League," Inter coach Jose Mourinho told Sky when asked if his side must now focus more on Europe with Serie A becoming a stroll.

Juve, who lost at Bordeaux in the Champions League in midweek, have struggled to find fluency for most of the season under rookie coach Ciro Ferrara but were slightly unfortunate in Sardinia.

Nene opened the scoring with a rocket from just outside the edge of the area after half an hour and after sustained Juve pressure, including a strong penalty appeal, Alessandro Matri broke at the other end to seal victory for Cagliari late on.

Promoted Parma moved up to joint fourth with Sampdoria, beaten 3-0 by sixth-placed Genoa in Saturday's derby, thanks to a 1-1 home draw with Napoli.

Cagliari are seventh with Bari, AS Roma and Fiorentina just a point further back after 14 games.

Bari, who came up last season and have rejected two recent takeover attempts, came from behind to win 2-1 at home to bottom club Siena while Roma continued to improve with their own 2-1 comeback victory at lowly Atalanta.

Lazio's disappointing season drags on after a 0-0 draw against Bologna in Rome with their former coach Delio Rossi losing in his first league game in charge of Palermo, beaten 1-0 at Chievo.

© Copyright 2022 Reuters Limited. All rights reserved. Republication or redistribution of Reuters content, including by framing or similar means, is expressly prohibited without the prior written consent of Reuters. Reuters shall not be liable for any errors or delays in the content, or for any actions taken in reliance thereon.
Related News: Fiorentina, Inter Milan, Juve, Cagliari, Walter Samuel
COMMENT
Print this article