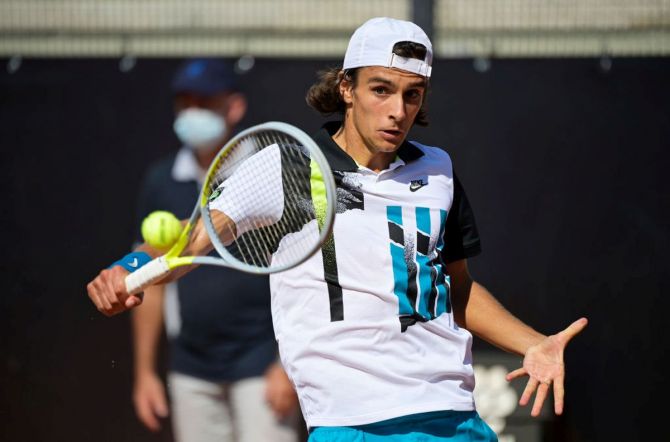 Three-times Grand slam champion Stan Wawrinka was soundly beaten 6-0, 7-6(2) by teenager Lorenzo Musetti, who won for the first time on the professional circuit in the first round of the Italian Open on Tuesday.

It was only a second game on the ATP Tour for the 18-year-old Italian, who came through three rounds of qualifying, before aggressively upending the 35-year-old Swiss to set up a second-round meeting with Japan's Kei Nishikori.

Wawrinka made a string of errors as he lost the first eight games before working his way back into the game.

Musetti, however, held his nerve to take the second set tiebreak and the match

Earlier, Denis Shapovalov and Andrey Rublev had cruised into the second round with emphatic straight-sets victories.

Ninth seed Rublev, making his debut at the Foro Italico, beat qualifier Facundo Bagnis 6-4, 6-4 to book a spot in the second round where he will face Hubert Hurkacz.

Alex de Minaur, another quarter-finalist at the US Open, was knocked out by Dominik Koepfer with the German fighting back from a set down to win 3-6, 6-3, 7-6(5).

In the women’s draw, Angelique Kerber was knocked out in a 6-3, 6-1 defeat to Czech Katerina Siniakova while Coco Gauf won her first ever match on clay.

Kerber, who reached the last-16 at the US Open, lasted only 69 minutes on the claycourt as Siniakova advanced in straight sets with five breaks of serve.

Kerber was almost bageled in the second set before she saved three match points to break for the first time in the contest but Siniakova broke back in the next game to seal victory.

American teenager Gauff, playing in her first ever main draw match on clay, came back from 4-2 down in the opening set to beat Tunisian Ons Jabeur 6-4, 6-3.