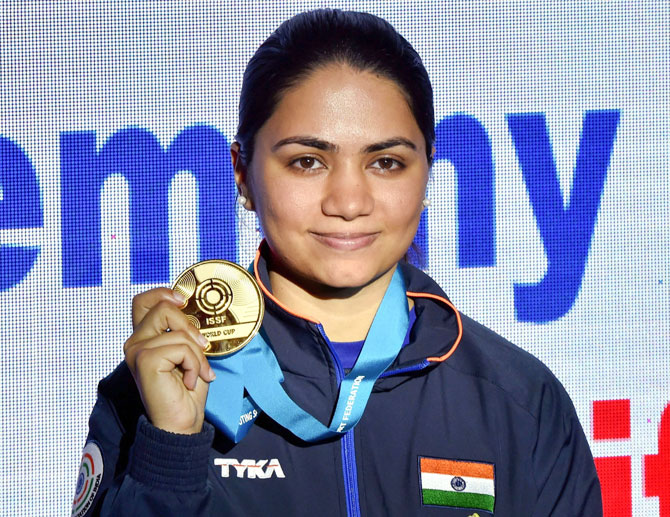 India's Apurvi Chandela shattered the world record on her way to the women's 10m air rifle gold with an incredible sequence of scores that never dropped below 10 in the ISSF World Cup in New Delhu on Saturday.

Producing her finest performance, the 26-year-old Chandela shot 252.9 to win the top prize on Day 1 of the International Shooting Sport Federation (ISSF) competitions, at the Dr Karni Singh Shooting Range.

Such was Chandela's dominance in the eight-woman final that she finished the event a staggering 1.1 points ahead of the silver medallist.

China's Ruozhu Zhao bagged silver with 251.8 while her compatriot, Hong Xu (230.4), finished the tournament's first final with a bronze.

Zhao held the previous world record with 252.4, which she shot at the World Cup in Changwon, Korea last April.

Chandela, who had secured a Tokyo Olympic quota in the last World Championships, was fourth in the qualifications with 629.3.

The other two Indians in the fray – Anjum Moudgil and Elavenil Valarivan – finished 12th (628) and 30th (625.3) respectively in the qualifications.

Zhao topped the chart with a qualification world record score of 634.

The final witnessed an astonishing display of shooting with Chandela, placed at the bottom to start with and watched by her mother Bindu, leapfrogged the rest of the field to emerge triumphant.

In her own words, the loud cheers from the crowds helped, as she rallied to grab the second place with a 10.6 in the 11th shot.

The exceptional series of scores continued unabated as she maintained her second position, a 10.8 propping her up at that stage of the final.

The top two Chinese meanwhile interchanged positions even as Chandela shot her way to the top of the pecking order and consolidated her position with a monstrous 10.8 in the 18th shot. 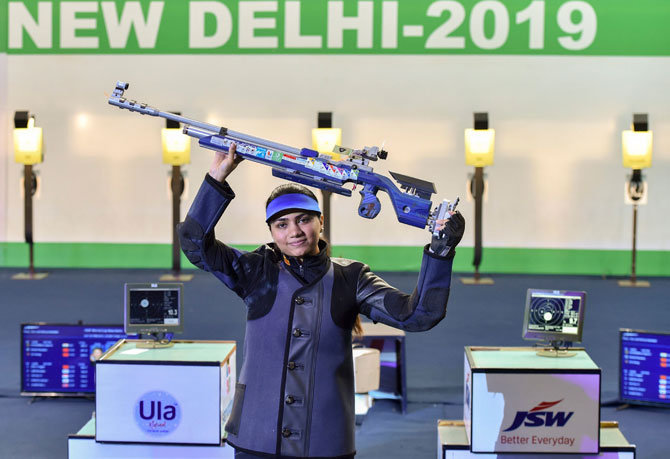 The 24th and final shot was a 10.5 from Chandela, same as Zhao, but the gap by then had only widened.

Chandela started with a 10.1 and she repeated the score only once over the next 23 shots.

"It's been a bit tough but I have been practising and not giving up. I am glad that I got the result today, there is a lot more to work on. A lot of important competitions ahead… so will look forward to bettering the performance," Chandela said.

This is Chandela's third individual medal at a World Cup. She won bronze in the Changwon World Cup in 2015 before winning silver at the ISSF World Cup Finals in the same year.

After winning gold at the 2014 Commonwealth Games, she had to be content with a bronze in the last edition of the Games in Gold Coast. At the 2018 Asian Games, she combined with Ravi Kumar to secure a third place finish.

India have already clinched the maximum of two Olympic quota places for the 2020 Tokyo Olympics in this event, but there was no dearth of motivation as Chandela, "pumped up" by a near-packed finals hall, demolished her famed rivals, including a Chinese triumvirate, one after another.

Mehuli Ghosh, who is not part of the Indian team and was shooting in the MQS (Minimum Qualification Scores) category, shot 631, which is the highest by an Indian in the event.

In the women's 25m pistol precision stage, Manu Bhaker was in full flow, topping the chart with 296. Chinky Yadav shot 288, while Rahi Sarnobat had 287.

In men's 50m rifle 3 positions qualification, Sanjeev Rajput (1173) and Parul Kumar (1149) were through while Chain Singh could not make it.