ISL: Simao to the rescue as NE United snatch points from Delhi

Marquee player Simao Sabrosa proved the super-sub as he rescued a point for NorthEast United as he scored within seconds of taking the field against Delhi Dynamos during their Hero Indian Super League clash in Delhi on Tuesday. 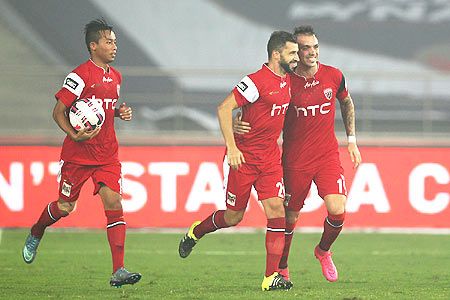 Delhi Dynamos were leading by a solitary first half goal scored by Richard Gadze (37th minute) and looked like they would open a two-point lead at the top of the table.

But Sabrosa had other ideas when he scored a stunning free-kick to help NorthEast United hold Delhi Dynamos 1-1.

Delhi Dynamos now have the same number of points as FC Pune City (13 points) but are placed second with an inferior goal average. NorthEast United are in seventh spot with seven points from as many matches.

Just after the half hour mark, NorthEast came close again but this time goalkeeper Toni Doblas came up with two fine attempts to deny Sanju Pradhan and Francis Dadzie.

Delhi Dynamos surged ahead in the 37th minute after Florent Malouda had done exceptionally well to slice the rival defence with a through pass that Gadze intercepted well and then beat goalkeeper TP Rehenesh for the opening goal.

In the second session, the crossbar denied NorthEast another goal as a free-kick from Silas hit the top of the crossbar and sailed out.

Amazingly, another attempt from Dadzie struck the woodwork in the 61st minute.

There was drama when Simao took the field in the 72nd minute as NorthEast initially believed they had won a penalty when Diomansy Kamara was felled inside the box after making contact with Hans Mulder. But the referee consulted his assistant and adjudged that the offence had occurred outside the box.

During the commotion, NorthEast United coach Cesar Farias replaced Silas with Sabrosa and the Portuguese calmly stepped back and curled the ball from inches outside the box straight into the top corner of the net.