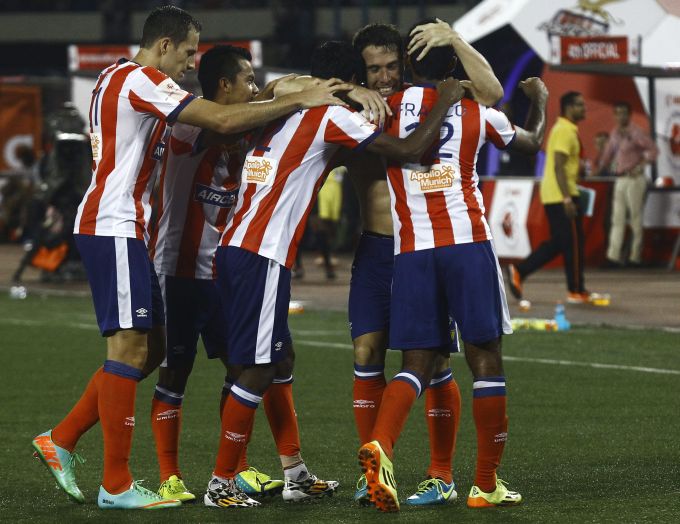 The former Portugal frontman Postiga showed his predatory skills with two opportunistic strikes in the 13th and 70th minute while substitute Spanish striker Valdo also found his name on the scoresheet.

For Chennaiyin FC, Jeje Lalpeklhua hit one in the 31st minute while their main player and skipper Elano Blumer got one back converting a controversial penalty in the 89th minute when the referee awarded penalty with the ball rebounding off ATK stopper Arnab Mondal's stomach.

However there was some bad news for the ATK fans as Postiga might just be out for a week to 10 days after he pulled a hamstring while taking a crack during the second goal and was stretchered off the field.

For Chennai outfit, the absence of Marco Materazzi, serving a one-match touchline ban from the last season did have its ill-effects as Chennai left Bruno Melissari and Stiven Mendoza from starting line-up.

For ATK, Iain Hume was a livewire down the left flank as he tormented Chennai side back Avishek Das.

In fact all the three goals conceded by Chennaiyin were due to defensive lapses.

In the 13th minute, Borja kept a floater inside the box and a surging goalkeeper Edel Bete collided with Mailson Alves leaving Postiga with an open net and the scorer of 27 international goals did not disappoint.

In the 31st minute, it was Elano, who kept a cross for Fikru Teferra who was intercepted by ATK goalie Amrinder Singh but as the two collided, an unmarked Jeje slotted the ball home.