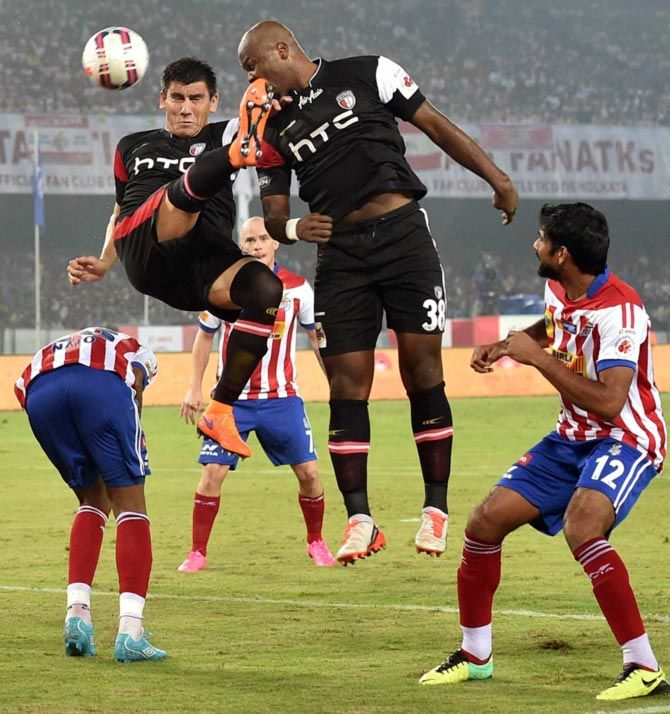 This was the Highlanders' third win this season to take their tally to 10 points, same as ATK and Chennayin FC, who are on fifth and sixth places respectively on goal difference.

For the home side, this was their fourth loss of the season and second successive at home with their last match against Delhi Dynamos FC ending on an identical scoreline.

The visitors stunned the home fans, taking a ninth minute lead through a Sabrosa penalty, which came off a dubious decision. Referee David John Gantar pointed to the dreaded spot, much to the horror of the home side, after Carlos Lopez was brought down inside the box by Ofentse Nato in a goalmouth melee from a Simao corner.

A fit-again Simao, who started in the playing eleven, converted the penalty without much fuss and the visitors held on to the lead in the first-half despite some promising raids by ATK.

The defending champions had their best chance in the 38th minute when their latest recruit Mohammad Rafique, after being set up by Borja Fernandes, brillianty side-stepped Raju Yumnam from the right flank to send a perfect cross to Iain Hume.

The hat-trick hero in Mumbai, however failed, to keep the header down as the ball sailed over the bar and landed on the roof of the net.

NorthEast looked extremely organised after the changeover and put all their force in the backline with the giant Andre Bikey of Cameroon holding fort along with Argentine Carlos Lopez in the central defence.

In fact, the six-feet-tall defender should be given the credit for earning full points in an away match with a brilliant interception near the goalline in the 65th minute.

Displaying a perfect execution of defence, Bikey kept Hume stranded near the goal when he guided a well-directed cross of Samheed Doutie away.

ATK, too, changed their strategy and bolstered their attack with Hume, Valdo and Rafique up front but their poor luck continued and they could not find the equaliser.

Desparate to return to winning ways, Farias made a flurry of changes including their marquee player Simao, who figured in the starting playing eleven after recovering from injury.

Habas did not tinker much with the team that won 4-1 in Mumbai with Rafique being the solitary change in place of Syed Rahim Nabi.