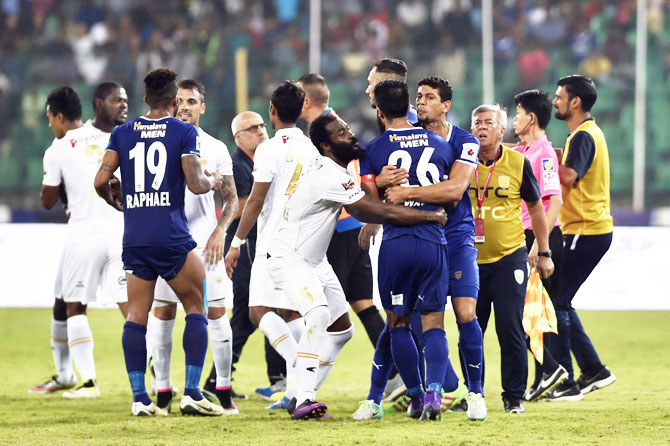 NorthEast United scored in the final minute of the added time to hold defending champions Chennaiyin FC to a 3-3 draw in a thrilling match and kept themselves alive for a play-offs berth in the Indian Super League football in Chennai on Saturday.

Five minutes were added as injury time and Shouvik Ghosh headed the ball in off a corner kick in a dramatic fashion with just seconds left in the match, to restore parity and give one point for NorthEast at the Jawaharlal Nehru Stadium.

NorthEast came from behind thrice in the match and the draw meant that they remained in the hunt for a last-four berth as they are now at fifth spot in the league table with 15 points from 12 matches. They have two matches in hand.

For Chennaiyin, MacPherlin Dudu scored a hat-trick but his superb efforts were just not enough to take full three points. A win here would have very much kept Chennaiyin in the hunt for a play-offs berth.

With 15 points from 13 matches, Chennaiyin are now at the seventh spot and have very little chance of making the last-four stage though there is still mathematical probability to do so.

Dudu opened the scoring in the 34th minute before Nicolas Velez equalised four minutes later for NorthEast. Another goal by the Nigerian Dudu made it 2-1 at the break but Velez levelled again six minutes after the restart.

Dudu completed his hat-trick nine minutes from full-time but Shouvik Ghosh broke the hearts of Chennaiyin supporters with the late header off of Velez corner kick to share the spoils.

Tempers flared towards the end of the game with NorthEast pushing hard for a last-gasped equaliser. Velez saw an attempt of his own cleared off the goal-line by Eli Sabia in stoppage time before turning provider from the corner.