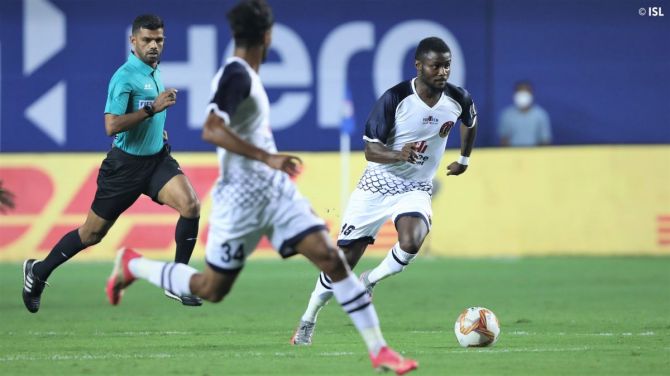 IMAGE: SC East Bengal's Bright Enobakhare was the player of the match in their ISL match against FC Goa in Vasco, Goa, on Wednesday. Photograph: ISL/Twitter

A late goal saved the day for FC Goa as they managed to grab a point after a hard-fought 1-1 draw against SC East Bengal in an Indian Super League match in Vasco on Wednesday.

In what was initially a cagey contest, SCEB took the lead through Bright Enobakhare's (79th) stunning solo goal. But FC Goa fought back with a goal from substitute Devendra Murgaonkar (81st) to deny their opponents a second successive win.

SC East Bengal played most part of the second half with 10 men after captain Daniel Fox was sent off in the 56th minute.

The first big chance of the game came in the fourth minute for FC Goa after Scott Neville tripped Jorge Ortiz Mendoza. Brandon Fernandes took the free-kick and swung a teasing cross at the far post for James Donachie, whose header was parried away by Majumder.

FC Goa continued to play in the opposition half after that early chance but SCEB defended resolutely despite being on the backfoot. However, the Red and Gold outfit also missed two back-to-back chances to grab the lead around the half-hour mark from set-pieces.

Aaron Amadi-Holloway first missed an open header from a free-kick. A minute later, SCEB won a throw-in, and Raju Gaikwad found an unmarked Daniel Fox at the far post but failed to keep his shot on target.

FC Goa continued to pile on the pressure on their opponents after the change of ends. But SCEB's hopes of grabbing control of the game suffered a huge blow when Fox was sent off in the 56th minute. The SCEB captain received his marching orders for a rough challenge on Alexander Jesuraj.

Despite the man-advantage, a defensive error from Goa almost gifted SCEB the lead. Matti Steinmann pounced on a sloppy pass from Princeton Rebello and made his way into the box before firing his shot wide. SCEB soon made amends for the missed opportunity as they scored the opener.

Enobakhare displayed a moment of magic and made his way into the box beating four markers before placing his shot into the bottom corner as he finished off a stunning solo goal. But FC Goa soon drew parity as SCEB's defence was caught napping.

Saviour Gama delivered a cross at the near post and Murgaonkar rose high to put FC Goa on level terms.

Both sides continued to hunt for the winner but in the end settled for a draw. 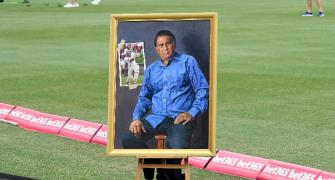 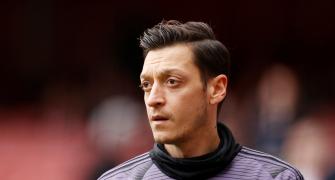 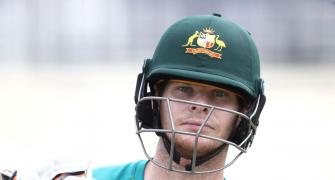 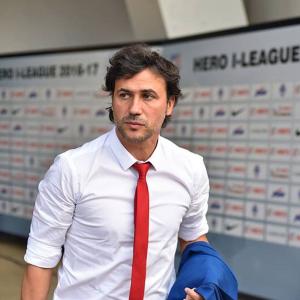 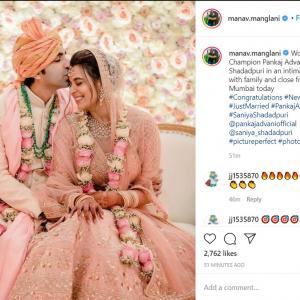