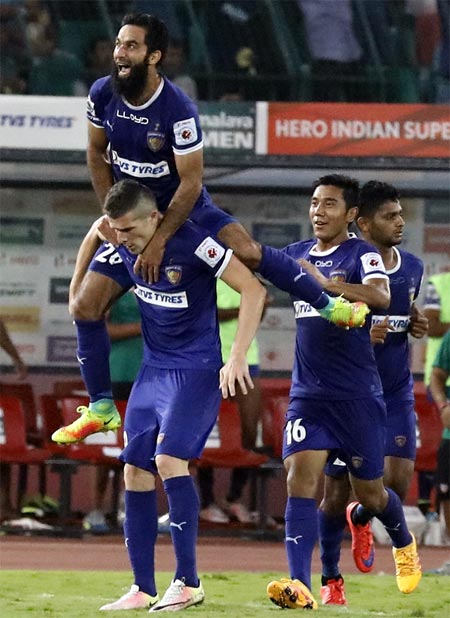 Defending champions Chennaiyin FC rallied from one-goal deficit to play out a 1-1 draw against Atletico de Kolkata in their Indian Super League football match in Chennai, on Sunday.

Former champions ATK enjoyed a first half lead through marquee player Helder Postiga in the 39th minute but Chennaiyin rallied in the second session and got the equaliser through Davide Succi in the 77th minute.

The visiting coach Jose Molina left everyone surprised with his starting line-up as he opted to start with Juan Belencoso, leaving Canadian striker and highest goal-scorer in the ISL, Iain Hume, on the bench.

Hume's absence did not hurt ATK in the first session as they continued with their attacking ways right from kick-off. The visitors should have been ahead in the third minute itself when a brilliant cross from Lalrindika Ralte towards the far post saw Postiga rise highest but his angled header hit the sidebar and bounced back into play.

It was a lucky escape for Chennaiyin, who took time to settle down and soon enough they had a chance to surge ahead. Raphael Augusto flicked the ball for Jeje Lalpekhlua who chested it down for Hans Mulder. The Dutch midfielder did well to time his half-volley to perfection but ATK goalkeeper Debjit Majumder did well to parry the ball away.

Chennaiyin, who have been disciplined at home this season, looked like they had done enough to guard their goal in the opening 45 minutes until Postiga struck with six minutes left.

Javi Lara and Pritam Kotal showed some fine understanding on the right while interplaying before Kotal sent a beautiful cross inside the danger zone where Postiga rose high to meet the ball and head it past goalkeeper Karanjit Singh.

Chennaiyin were a much improved side in the second half and raided the rival citadel time and again in search of the equaliser. Italian striker Davide Succi was at the end of most chances created by the home side but lacked sharpness.

In the 56th minute, he was put clear by Zakeer Mundampara on the right but Succi's first touch took the ball away, forcing him to miss the target by a whisker from a narrow angle.

Succi had another chance in the 71st minute when all alone inside the box after being at the right end of a through ball. The Italian drew out the goalkeeper and cut past him but his final shot only ended up hitting the side netting.

After two misses, Succi finally converted his third chance in the 77th minute, rising high to head a ball from Eli Sabia past a defender and the goalkeeper. 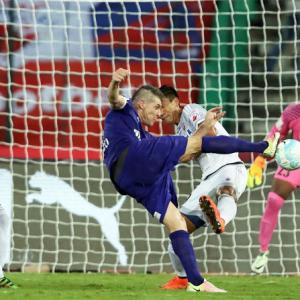 ISL: Chennaiyin back in reckoning after 2-0 win over Pune