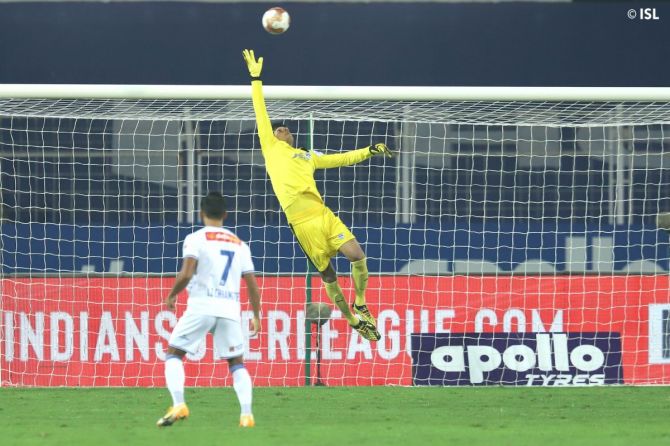 Chennaiyin FC's chances of progressing into the top four received a huge blow following their frustrating goalless draw against Bengaluru FC in an Indian Super League match in Margao on Friday.

Coach Csaba Laszlo's side put up a spirited performance but their misfiring attack couldn't get past Bengaluru keeper Gurpreet Singh Sandhu, who was kept on his toes throughout the match at Fatorda Stadium.

BFC interim coach Naushad Moosa rang in two changes to his Bengaluru side which won against SC East Bengal as Erik Paartalu and Parag Srivas were given starts.

Manuel Lanzarote was handed his debut for Chennaiyin as Anirudh Thapa and Enes Sipovic returned.

Chennaiyin had the first chance of the game when Esmael Goncalves made his way into the Bengaluru area but his shot was saved by a diving Gurpreet. Rahim Ali got the rebound, but his tame shot was easily stopped by the custodian.

Moments later, Thapa swirled in a cross into the box, which was met by Lallianzuala Chhangte, but the header found Gurpreet.

It was Ali next, who on entering the area, released the ball to Chhangte on the left. The winger cut inside and shot straight valiantly.

Chennaiyin's defense was a tough nut to crack as Eli Sabia and Vishal Kaith came with crucial interceptions and blocks to deny Sunil Chhetri and Paartalu.

Chennaiyin were denied with an opening goal just before the breather. Chhangte raced down the far side and set Lanzarote through.

The Spaniard got into the box and played a lofted pass to Goncalves but Gurpreet anticipated danger and charged ahead to get the crucial touch, to deflect the ball off Goncalves for a goal kick. This was arguably the best chance of the game.

In the second session, Chennaiyin continued their hunt for the goal. Lanzarote nearly scored from a set-piece but the BFC custodian managed to get a fingertip save onto the crossbar.

Bengaluru managed to get the ball in the back of the net but their celebrations were cut short when the referee disallowed the goal.

Xisco Hernandez picked Francisco Gonzalez at the back post, and he headed into the back of the net but the assistant referee had raised his flag.

The BFC post had more action with Gurpreet exerting yet again. The India international pulled off another diving save to deny Chhangte late in the game.

Chennaiyin nearly took the lead with Memo Moura's 30-yard free-kick but it was the woodwork that came to Bengaluru's rescue.