The sports fraternity expressed outrage over the International Olympic Committee's decision to suspend India for government interference, with some athletes blaming the IOA for the entire fiasco.

While some former sportspersons were critical of the way the IOA handled the whole issue, some current athletes bemoaned the fact that their Olympic participation for the country has been jeopardised.

"It's unfortunate but I am not too sure about the issue, haven't been following them of late," he said.

Beijing Games bronze medallist boxer Vijender Singh agreed with Narang but hoped for an early settlement of the issue.

"I don't know what has gone wrong. It is an unfortunate development. Elections were to be held under the Sports Code which is similar to the IOC Charter. So, I don't know why the IOC took this step.

"I hope the matter is resolved early so that there is no long-term implication on athletes," the 29-year-old strapping pugilist said.

Five-time women's World champion boxer and another London Games bronze medallist M C Mary Kom was appalled by the development and said it the sportspersons who will have to bear the brunt.

"I am absolutely shocked by this news. I don't know how the matter was handled by the higher authorities. But it is the athletes who will suffer if the situation is not resolved quickly," she said.

Randhir is a traitor: Chautala

Meanwhile, terming the suspension a "black day" for India, IOA president-elect Abhay Singh Chautala lashed out at Randhir Singh and said the latter "conspired against the nation and its sportspersons".

"Randhir is a traitor. He conspired against the nation, its spokespersons. Being an IOC official he should have helped the country, but he had vested interests and put the country in such a mess today," Chautala alleged during a press conference.

"It's a black day for the country," he added. 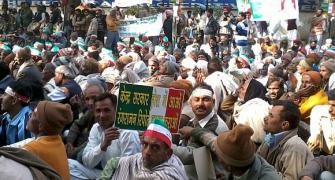 Why the Indian Olympic Association was banned by IOA