Promising India forward Yuvraj Walmiki has been ruled out of the remainder of the men's Olympic hockey qualification tournament due to a hamstring injury.

He sustained the injury during India's third round-robin match against France on Tuesday and did not play in the hard-fought 3-2 win over Canada on Wednesday night.

It is suspected that Walmiki has aggravated a previous injury and will need at least 21 days to regain match fitness.

- Photos from the Olympic hockey qualifier

"He (Walmiki) underwent an MRI scan yesterday and reports suggest that he is suffering from a hamstring tear, which will probably take 7 to 10 days to repair," India coach Micheal Nobbs told reporters at the Major Dhyan Chand National Stadium ahead of Friday final round-robin match against Poland. 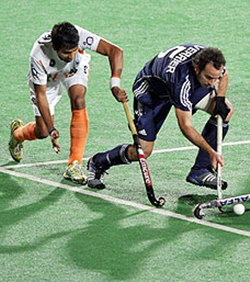 "We fear he might have aggravated a previous injury. In that scenario, he will take at least 21 days to recover. He is a very talented player and crucial to our scheme of things. So, we will carefully look into his rehabilitation," he said.

Nobbs conceded his side will miss Walmiki, but said he has enough resources in the squad to make up for his loss.

"As per the rules of the tournament, we can't call for a replacement. But we have 17 more players in the squad. We may use (defender) Rupinder Pal Singh in the forwardline tomorrow because we used him successfully in this position in Australia," Nobbs said.

Nobbs hinted that he will continue to experiment with the side and may play both the goalkeepers -- captain Bharat Chetri and P R Srejeesh -- alternatively on Friday.

"The rotation system has been very successful for us. It enables us to field fresh players. We may play both Bharat and Sreejesh tomorrow. They may play half a game each," Nobbs said.

"We will try a few things, but we will play to win."

Both Chetri and Sreejesh were the cynosure of Thursday's training session as the coach put the duo on an exercise to stop goal-bound shots with their team-mates firing from all angles from short distance.

"The drill was basically aimed at sharpening them up. They had very good games in the tournament but did not get enough shots at their goal," Nobbs said.

Chetri said, "We did not get enough tries at our goal in the last four games. So, the shooting exercise was aimed at sharpening our reflexes and rhythm."

Pakistan wants to have excellent relations with US: Gilani