Commonwealth Games gold medallist sent air tickets to join the Indian badminton squad at the South Asian Games despite being laid low by an abdominal strain.

'If I play I might again aggravate my injury.' 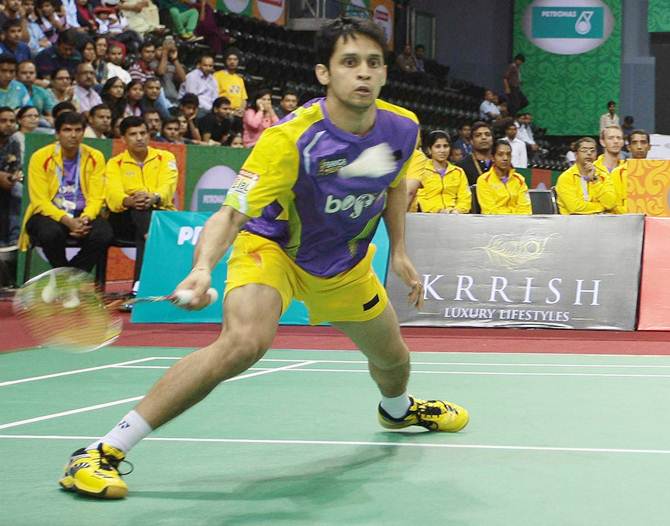 IMAGE: With 12 weeks left to earn a berth at the Rio Olympics, Parupalli Kashyap is racing against time to even be fit to compete in the tournaments crucial to fetch qualifying points.

His repeated requests for rehabilitation ignored, Commonwealth Games gold medallist Parupalli Kashyap is flummoxed after being sent air tickets to join the Indian badminton squad at the South Asian Games despite being laid low by an abdominal strain.

Once ranked world No.8, the 29-year-old shuttler has been dogged by injuries as a result of which his ranking has dropped to 14 in the latest chart.

With 12 weeks left to earn a berth at the Rio Olympics, he is racing against time to even be fit to compete in the tournaments crucial to fetch qualifying points.

Kashyap had written to the Badminton Association of India (BAI) and Sports Ministry requesting that he be allowed to skip the South Asian Games.

"I lost out a lot of time because of the injury. I missed out on as many as seven tournaments. I managed to play at PBL and Syed Modi Grand Prix Gold but again I had an abdominal strain in Lucknow and I had to withdraw from Thailand Masters as well," Kashyap said.

"But now BAI and the government want me to play at the South Asian Games. I am in no position to play. I can't play. I have sent letters to BAI, and the ministry explaining my situation. I also spoke to DG, SAI Injeti Srinivas but still I haven't got any positive response. On the contrary, I got the tickets for Guwahati today. I am feeling very frustrated," a disturbed Kashyap said.

He feels his case should have been treated differently.

"I understand India is hosting this event and Government wants to showcase the best team. But mine is a special case, I am injured now. I have just 12 weeks to qualify for the Olympics. Out of which I can also play for seven weeks and train for five weeks.

"This in itself is a huge task. On top of it, to expect me to play at SA Games is too much. I don't know what to do. If I play I might again aggravate my injury.

"If I were fit, I could have played. But I just can't play. But no one is listening to me."

Kashyap suffered a calf muscle tear in his left leg during the French Open last October. It completely upset his preparation for the Olympics. Qualifying for the Games depends on the world rankings in May and Kashyap have to do really well in international events to improve his standing and make the grade.

"Everybody else have at least played all through the year. I missed out because of injury and now I need at least four weeks to be fit for the European circuit -- German, All-England and Swiss Open. Then also I don't have any time, it will be India, Malaysia and Singapore Open, six weeks straight. It would be crazy but I have to do it if I have to qualify," the 2014 Commonwealth Games champion said.