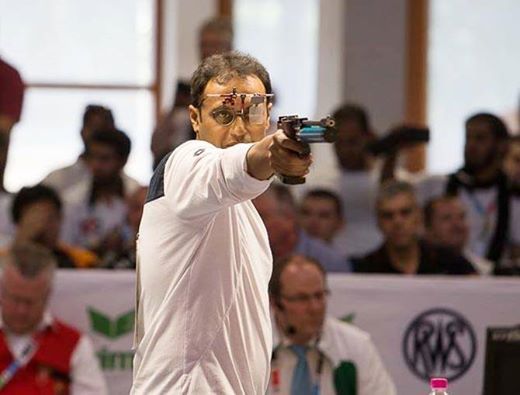 Indian shooter Prakash Nanjappa will compete at the Rio 2016 Olympic Games three years after being told by doctors that his career was over.

In 2013, he suffered 'a type of stroke or paralytic attack' at a World Cup event in Granada, Spain, and was diagnosed with a type of paralysis known as Bell's palsy, chiefly on the right side of his face.

"The scariest part was when the doctor said I would have to stop shooting," Nanjappa said.

"That motivated me to come back.

"When it happened I looked at myself in the mirror and something was wrong with my face, it was frightening. It looked like my shooting career would be over."

Nanjappa recovered in six weeks and, despite continuing to experience some symptoms, he is fit and healthy for Rio.

The 40-year-old also suffered wrist pain during the 2013 world cup event in Changwon, Republic of Korea, but still won a bronze medal, which at the time was the best performance by an Indian male shooter.

Nanjappa was initially a promising badminton player, before a torn ankle ligament forced him to quit. He took up shooting as a challenge from his father but, lacking financial support, moved to Canada to work for several years.

"There was something missing," Nanjappa said. "I spoke to my father and he suggested I get back to what I love and start shooting again.

Nanjappa won a silver medal at the 2014 Glasgow Commonwealth Games in the 10m air pistol and his performances have steadily improved.

The men's 50m pistol takes place at the Olympic Shooting Centre on August 10.