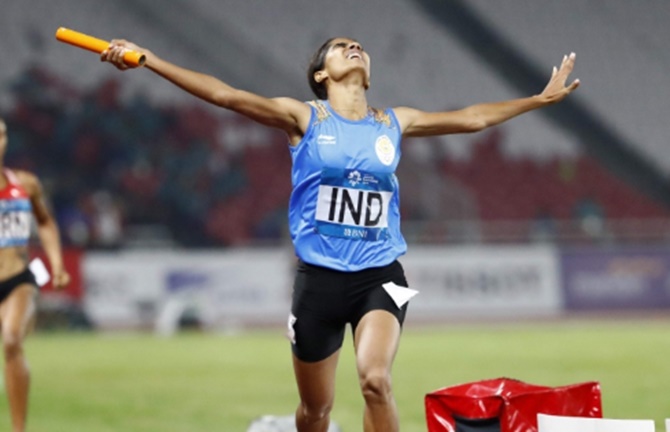 V K Vismaya stunned her fancied opponents, M R Poovamma and Hima Das, to win the gold medal in the women's 400m race at the Indian Grand Prix-3, in Sangrur, on Saturday.

Vismaya, who had won a team gold in 4x400m at the 2018 Asian Games, has only been competing in international tournaments since last year, but she managed to get the better of two-time Asian Games gold medallist Poovamma and world junior champion and national record holder Hima.

Timings and efforts were on the lower side as athletes competed in chilly conditions at the War Heroes Stadium.

Prachi though managed to keep Hima off the podium. Das, who holds the national record of 50.79 in her name, was well off her best as she recorded a time of 55.19. The time was the slowest of her career.

However, Das was only running her first competitive race of the season and is likely to improve as the season progresses. The victory was the second for Vismaya at the Indian GP this season. She had also won a gold at the first Indian GP of the season in Patiala on February 23.

Meanwhile, Rajiv Arokia won the men's 400m race with a timing of 46.32. National record holder Mohammed Anas who made a start to his season with the Sangrur meet clocked 46.60 and finished second, while with the timing of 46.75, Jeevan K S won the bronze.

Another national record holder, M Shreeshankar was also well off his personal best in the long jump, but still managed to do enough to win the gold medal.

Sreeshankar recorded a best jump of 7.74m to step on top of the podium. Sreeshankar, who had a personal best of 8.20m, recorded a jump of 7.72m to start out with before improving to 7.74 with his second. He recorded a subsequent jump of 7.70m before fouling his fourth attempt. That effort would be his last of the competition as he opted out of his final two attempts.

The silver went to M Silambarasan of Tamil Nadu who recorded a best effort of 7.25m on his third attempts. Silambarasan narrowly beat Siddharth Mohan Naik of Karnataka who took the third step of the podium with an effort only 1cm short of silver place. Naik recorded a jump of 7.24m as his best of the competition. IMAGE: It was under Tan Kim Her that Chirag and Satwiksairaj Rankireddy emerged as India's premier men's doubles pair. Photograph: PTI

Malaysia's Tan Kim Her has stepped down from his post as India's doubles badminton coach, citing personal reasons.

The 47-year-old put down his papers one-and-a-half years before his contract with the Badminton Association of India (BAI) was to end after the 2020 Tokyo Olympics.

"Yes, Tan Kim Her has resigned as doubles coach. He had put down his papers about a month back. He had some family problems," BAI secretary (events) Omar Rashid said.

Tan Kim Her has earlier coached England, South Korea and Malaysia and there are speculations that he might have received some lucrative offer from another country.

While Rashid denied there is any truth in such speculations, India's doubles player Chirag Shetty said the Malaysian is set to join Nippon Badminton Association, the governing body of Japan.

"Tan Kim Her left India yesterday and he will be joining the Japan national team," Chirag said.

It was under Tan Kim Her that Chirag and Satwiksairaj Rankireddy emerged as India's premier men's doubles pair, who won the silver medal at the Commonwealth Games and also helped the country win the mixed team gold for the first time.

The Indian duo won the Hyderabad Open Super 100 event and also reached the finals at Syed Modi Super 300 tournament and are currently ranked 20th in the world.

The women's pair of N Sikki Reddy and Ashwini Ponnappa also have done well under the Malaysian's guidance, claiming the bronze medal at the Gold Coast event.

"I came to know about his resignation a 2-3 weeks back, he told us that he is leaving. It was a big news for us," said Satwiksairaj, who is nursing a shoulder injury.

"He had a huge influence on us. It is an Olympic year but thankfully a new coach is coming, so we need to talk to him and see how his game suit us.

"We will get to see a different kind of approach now. So some small things will change but it won't make much difference because our game is mostly attacking and wejust need someone to guide us," he added.

The onus of guiding the Indian doubles pairs will now rest on two new doubles coaches -- Flandy Limpele and Namrih Suroto -- both from Indonesia, who were also hired by the BAI.

Chirag felt it will help them as Limpele will see their game in a new light.

"Tan Kim Her leaving is a setback for us in a way as we have achieved a lot under him but with the new Indonesian coach coming in, I think it will help us as he will see our game in a new perspective," he said.

"He is coming today. He has got great credentials and it might take some time to adjust to his method of training but I am hoping we will be benefited like we saw in the case of Mulyo Handoyo, who came and suddenly we won so many titles in 2017."

He was widely credited for the rise of India's men's singles players with Kidambi Srikanth winning four titles and B Sai Praneeth also claiming his maiden Super Series crown in Singapore.

BAI has recently roped in two Korean coaches Kim Ji Hyun and Park Tae Sang to help the women's singles and men's singles players and the Indian team is awaiting the duo's arrival.