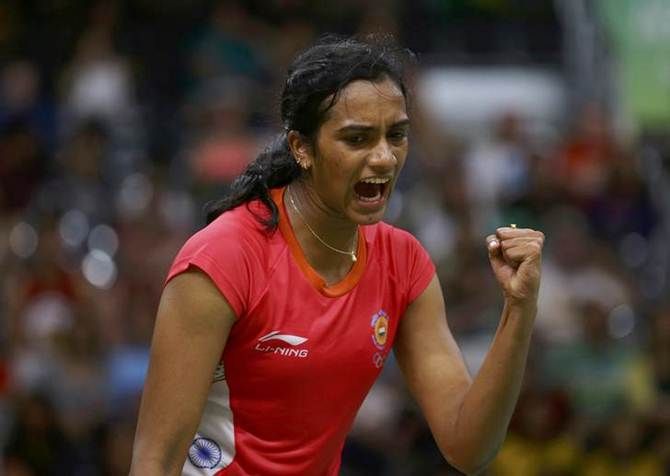 IMAGE: India’s P V Sindhu reacts after scoring a point against Michelle Li of Canada in her group match at the Rio Olympics on Sunday. Photograph: Marcelo del Pozo/Reuters

India's medal hope Saina Nehwal crashed out of the Rio Games after suffering a straight-games' defeat to lower-ranked Maria Ulitina of Ukraine in her second Group G match at the Rio Olympics on Sunday.

In one of the biggest upsets of the badminton tournament, the London Olympics bronze medalist, who played the match with an inflammation in her right knee, lost 18-21, 19-21 in 39 minutes.

However, Kidambi Srikanth and P V Sindhu provided some cheer in the Indian camp by making it to the pre-quarter-finals from their respective groups in the  men's and women's singles.

Srikanth, the lone Indian in the men's singles, reached the knock-out rounds from Group H after defeating Sweden's Henri Hurskainen 21-6, 21-18 in his second match.

Saina had beaten Brazil's Vicente Lohaynny on August 11 in her opening match and needed to overcome Ulitina to progress.

However, the world No. 61 Ukrainian, who had also beaten Vicente in her opening match, reached the knock-out stage from Group G at the expense of Saina and the Brazilian girl.

Players have to win both matches in the group to move into the last 32 at the badminton singles event. Each group has three players and only one from each group goes through.

Since Ulitina won both matches, Saina was eliminated.

After her shocking ouster from the Olympics, Saina said: "Was restricted by my movements because inflamed right knee was strapped. She played well."

The Indian looked rusty from the outset, squandering an initial 6-1 lead,  allowing Ulitina to level the scores at 8-8 after burying the shuttle into the net.

The Ukrainian posed a lot of questions as Saina missed a few shots in the forecourt and rear.

The Indian, however, managed to enter the short break ahead at 11-9 with a drop which Maria could not return from the forecourt.

With Saina continuing to be sluggish, Ulitina got to 19-17 and then game point with a cross-court round-the-head smash which caught Saina napping.

The Indian then hit wide, allowing Ulitina to earn the bragging rights after clinching the opening game.

In the second game, Ulitina used her height to good advantage, playing some sharp and stiff smashes and deft drops which Saina failed to negotiate.

The Indian went into the break leading by a point, but the Ukranian dominated the pace of the rallies even as Saina seemed restricted in her movement.

Ulitina slowly reached match-point with a cross-court smash and entered the pre-quarter finals scoring with a lucky net chord drop.