IMAGE: India's Ritu Phogat gets into a dominant position during her MMA Championship bout against Cambodia's Nou Srey Pov in Singapore.

The 26-year-old defeated Cambodia's Nou Srey Pov by a technical knock-out verdict in the second round.

The match was part of ONE Championship’s ONE: INSIDE THE MATRIX event that featured four exciting World Championship contests, broadcast live from the Singapore Indoor Stadium.

The Indian wrestling champion, also known as ‘The Indian Tigress', put up an aggressive display during her convincing victory over the Cambodian, forcing the referee stop the contest two minutes and two seconds into Round 2.

Phogat dominated the first round, landing multiple takedowns while doing damage on the ground in a dominant position. She landed a pair of solid rights before taking Nou down to the ground again in the second round, where she finished in top position with strikes. 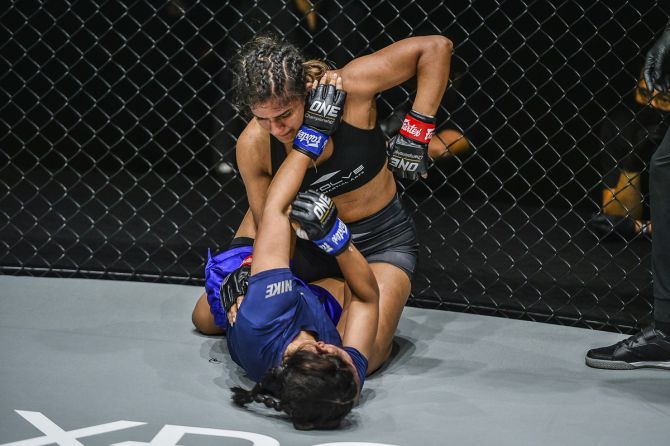 Commenting on her stellar performance, Phogat said, "It feels ecstatic to have a hat-trick in my MMA career with this win. Moreover, the hardships and challenges that I faced during to the pandemic have indeed paid off. I feel euphoric to be taking India to new heights in the MMA space.

“I cannot be more proud. I am grateful to my family, friends and fans back home who have rooted for me unwaveringly and have been extremely optimistic about my performance today.

“Lastly, I would also want to thank my coach who has played a significant role in my journey and whose strategies I have sworn by to defeat Cambodian champion Nou Srey Pov. I now look forward to the Grand Prix where I aim to own the World Championship title."

Talking about her performance, Nou Srey Pov said, "I regret that I could not complete three rounds as per my plan. Ritu is too tough and much faster than me. I feel sorry for my Cambodian fans that I couldn't deliver a victory for them. However, I promise that I'll come back stronger than before."