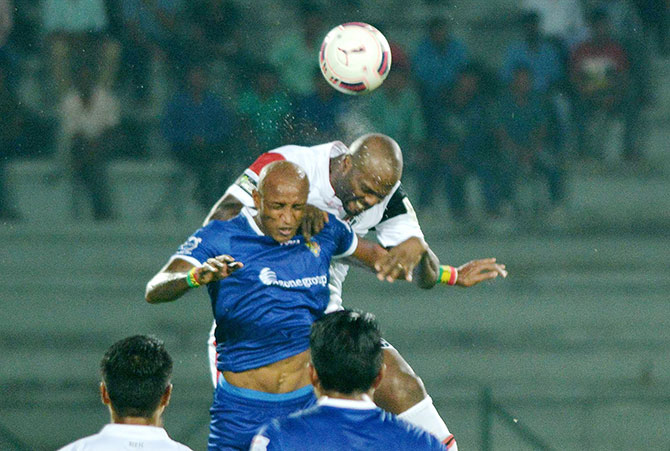 NorthEast United tasted their first win of the season with a 2-0 victory over 10-man Chennaiyin FC in an eventful Indian Super League football match that was marred by frayed tempers and violent conduct of players of both sides in Guwahati on Tuesday.

Portuguese midfielder Simao Sabrosa converted from the penalty spot in the 90th minute while Argentine forward Nicolas Leandro Velez put the game beyond Chennaiyin's reach in the injury time (90+5) to hand NorthEast United their first points in the season at their home ground.

The match, which saw one red and 10 yellow cards being shown by the referee, witnessed many heated moments, with the players almost exchanging blows at times. Chennaiyin played with 10 men from the 40th minute onwards after Harmanjot Khabra was given a straight red card by the referee for
violent conduct.

Before the half time, NorthEast head coach Cesar Farias and his Chennaiyin counterpart Marco Materazzi exchanged heated words from their respective touchlines. This brought players and officials from both sides face-to-face and on the verge of exchanging blows and the match was interrupted for about five minutes.

The visiting team's captain Bernard Mendy chased Farias and he had to be stopped physically by other players and the referee.

After the referee blew the final whistle, Mendy again chased Farias and this time the players of both the sides were involved in a scuffle. The referee had to intervene and security officials prevented the situation from worsening further in front of the nearly 20,000 crowd at the Indira Gandhi Stadium.

In the 77th minute, NorthEast United's Sabrosa and Chennaiyin's Mehrajuddin Wadoo got involved in a face-off and both were shown the yellow cards. In the first half, NorthEast got ample chances but failed to convert them into goals.