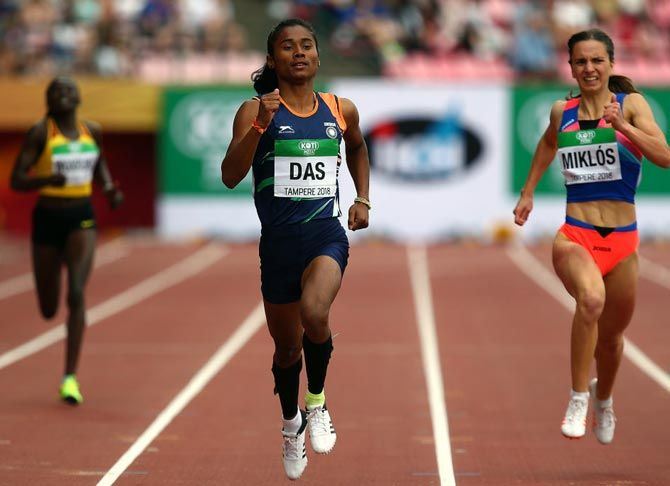 IMAGE: The Athletics Federation of India is trying to book an alternate flight. Photograph: Charlie Crowhurst/Getty Images for IAAF

Star sprinters Hima Das and Dutee Chand might miss the Olympic qualifying World Athletics Relays in Poland on May 1 and 2 as the Indian team's connecting flight to Amsterdam has been suspended following the record-shattering spike in the country's COVID-19 case load.

The women's 4x100m and the men's 4x400m relay teams were to board a KLM flight to Amsterdam in the wee hours on Thursday but the Dutch government has suspended flights from India effective Monday evening.

The Athletics Federation of India is trying to book an alternate flight available to any European city en route to Silesia in Poland where the event will be held. There is no direct flight to Poland from India.

"There is a serious doubt that our team may not be able to take part in the World Relays. Many European countries have suspended flights from India. So, we may be stuck and there is a high possibility that the team may not go for the event," a top AFI official said.

"But still we are trying, talking to the government and to our embassies if they can help our athletes to fly in any European city like Frankfurt from where they can proceed to Poland. We are also trying for any connecting flight to Dubai or any other West Asian city."

India will also field teams in the men's 4x400m in the event to be held in Chorzow, Silesia, in Poland.

The top eight teams from the World Athletics Relays will automatically qualify for the Tokyo Olympics.

The women's 4x400m relay team has pulled out of the event as more than two members are unfit.

The AFI was hopeful of the women's 4x100m relay team qualifying for the upcoming Olympics in Tokyo.

The World Relays will be the first major international event for Indian sprinters since the Asian Athletics Championships in Doha in April 2019.