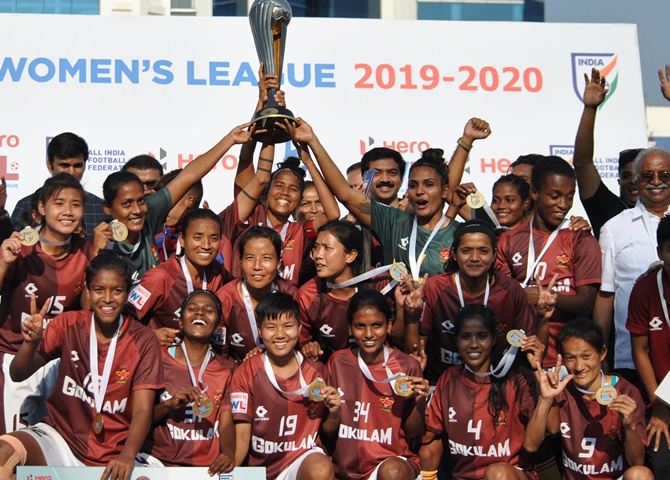 Gokulam Kerala were crowned champions of the Hero Indian Women's League after a dramatic 3-2 victory over Kangchup Road Young Physical and Sports Association (KRYPHSA) FC in the final, in Bengaluru, on Friday.

Gokulam Kerala raced to a 2-0 lead through early goals from Prameshwori Devi and Kamala Devi but Dangmei Grace pulled one back for Kryphsa to reduce the deficit before half-time.

Ratanbala Devi levelled the scores in the second-half to set her team on course for what would have been a phenomenal comeback. However, it was Sabitra Bhandari who struck a late winner for Gokulam.

The Malabarians took the lead after just 49 seconds on the clock. Kryphsa were caught napping when a speculative clearance from the Gokulam half found Sabitra Bhandari.

She got away with her sheer pace before delivering an inviting cross into the box. Prameshwori Devi was the first to react and found the back of the net with an instinctive finish.

The lead could have been doubled just five minutes later after Kamala Devi had put Bhandari through on goal. The latter made no mistake with her finish but her goal was ruled out for a foul on a covering Sweety Devi.

In the 25th minute, Gokulam earned a free-kick on the edge of the 18-yard box for a foul on Michel Castanha. Kamala Devi volunteered for the dead ball and with a stroke of luck, her curling effort took a deflection of the yellow wall and crept beyond the reach of keeper Linthoingambi Devi, who didn't stand a chance.

Kryphsa roared back in the 33rd minute to change the complexion of the game altogether.

Ranjan Chanu's immaculate set-piece delivery from the left found Anju Tamang, who managed to flick it to the far post with the back of her head. Gokulam keeper Aditi Chauhan's punch lacked power, leaving Dangmei Grace with an empty goal to aim at.

The Kryphsa skipper hit bull's eye with a flurry of Maroon shirts closing her down as the deficit was reduced going into the break.

The second half resumed with a slightly more cautious approach as either side refrained from going full throttle early on.

A clearance from Aditi Chauhan in the 69th minute found Kamala Devi, who put Sabitra Bhandari though on goal but Linthoingambi Devi did brilliantly to come off her line and avert the danger.

With the match picking up pace, Kryphsa's Roja Devi chipped one into the box and Ratanbala Devi read her intent and make the overlapping run. She stretched her favoured right foot and got the touch she was hoping for, beating an onrushing Aditi Chauhan to get her side back on level terms.

With just three minutes remaining of normal time, Manisha Kalyan won an aerial battle on the edge of the 18-yard box, before providing a low-driven delivery across goal. Gokulam talisman Bhandari was there again to finish.

A rampaging Mohun Bagan mauled Neroca FC 6-2 for their fifth straight win in the I-League, in Kalyani, West Bengal.

Fran Gonzalez headlined the drubbing with a first half hat-trick (10th, 24th and 45th minute), while Fran Morante (13th), Baba Diawara (37th) and Alexander Romario Jesuraj (70th) scored once each in the rout.

Mohun Bagan were reduced to 10 players after captain Dhanachandra Singh was sent off for handling a goal-bound ball at the one-hour mark.

Still they went all guns blazing with goalkeeper Sankar Roy pulling off a fantastic save and also pumping in one more 10 minutes later.

Philip Adjah (41st) and Subhash Singh (45+2nd) scored for the Imphal outfit as the first half saw seven goals in front of an exited Kalyani Stadium crowd.

Unbeaten in the last 10 matches, the 2014-15 champions looked set for a second title in their last I-League season, with a massive 11-point lead over Minerva Punjab (18) atop the standings.

Neroca FC languished at the bottom with 12 points from 13 matches.

Earlier, both the teams' players observed silence, paying homage to the 40 martyrs of the Pulwama Attack on its first anniversary.