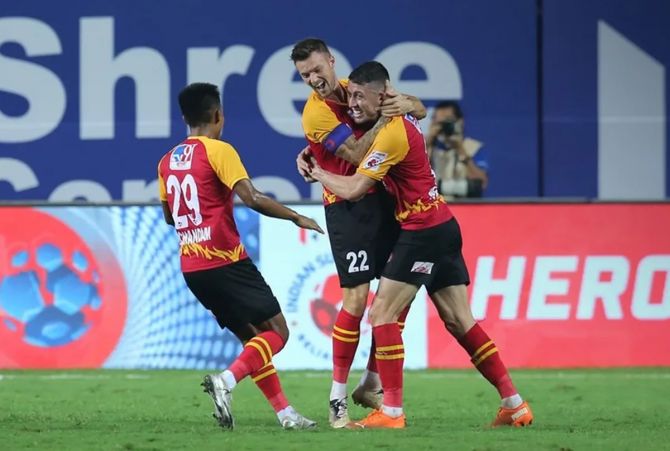 Scott Neville scored with a stunning header in the dying minutes to help SC East Bengal secure a 1-1 draw against Kerala Blasters in a Hero Indian Super League match at Tilak Maidan, in Vasco, on Friday.

Jordan Murray put Kerala ahead in the 64th minute before Neville's stoppage-time equaliser (90+5) ensured that SCEB extended their unbeaten run to six games.

The result was a mirror image of the reverse fixture between the two sides when Kerala had punished SCEB with an injury-time equaliser.

The first half was an end-to-end contest, with both sides creating plenty of chances but strikers on either team lacked the finishing.

Both the keepers were tested early on. And it was Kerala who created the first big chance of the game. Receiving a diagonal ball, Murray fired a shot that was parried away by Debjit Majumder.

At the other end, Albino Gomes had to pull off another fine save to stop SCEB from taking the lead, denying Harmanpreet Singh from close range.

SCEB started the second half in control and fashioned a chance soon after the change of ends.

In the 47th minute, Bright Enobakhare drilled a low cross towards the goal from the left but Jessel Carneiro made a crucial goal-line clearance after initially failing to deal with the ball.

But it was Kerala who broke the deadlock moments later after a lapse in concentration from the SCEB defense.

Murray latched on to a long ball from Gomes, beat his marker then slotted past Majumder.

SCEB threw caution to the wind after the goal, making attacking substitutions as they fought their way back into the game.

In the dying minutes, they created a golden chance from a set-piece that could've drawn them level. Ajay Chettri delivered a wonderful cross from a free-kick which substitute Aaron Holloway failed to convert.

But SCEB's persistence finally paid off in injury time as they levelled from a corner. Enobakhare's cross found an unmarked Neville, who buried his header into the net and ensured SCEB went home with a point. 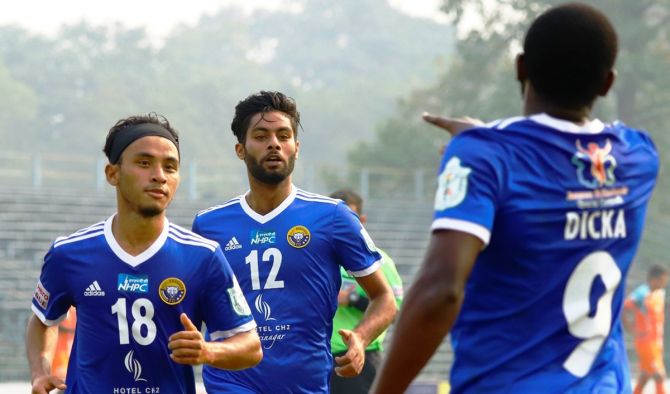 Dipanda Dicka and Lalrindika Ralte shone bright as Real Kashmir notched up their first win of the season, beating Chennai City FC 2-0 in an I-League fixture in Kolkata.

In a cagey match where chances were few and both teams cancelled each other out in the middle of the park, Dicka's 16-minute strike and a late goal by substitute Ralte proved to be the difference between the two sides.

Although Chennai City FC dominated possession for much of the match, Real Kashmir's counter-attacking style of play earned them the win.

"I am pleased with the win today, the boys played very well and showed real character on the field after our previous draw. I wish the team all the very best for their upcoming matches," RKFC owner Sandeep Chattoo said.

In the eighth minute, Dicka tried to squeeze in a header from a cross but his effort was saved by the opposition custodian.

Eight minutes later, the Cameroonian forward connected first time off a Lukman Adefemi cut-back inside the box and smashed the ball home to hand the Snow Leopards a solitary goal lead.

For all their possession in the final third, Chennai City seemed a bit lost in attack with no one able to open the defence of the Snow Leopards.

Even from set plays, Chennai seemed unsure of themselves. In the 38th minute, Chennai City's Serbian import Elvedin Skrijelj tried to equalize from a header off an Iqbal cross, both skewed it over the bar.

Perhaps the best opportunity of the match came for Chennai City FC in the 51st minute when Raju was found inside the box by a pin-point Mohammad cross. However, despite getting a free-header, the midfielder could only head the ball way off target.

In an extraordinary turn of events, Dicka in the 62nd minute found the net from an impressive bicycle kick making a stamping claim for the highlight reel. The referee, however, cut the celebrations short and ruled the goal offside.

Although Chennai played a very high line and even at one point had 11 men inside Real Kashmir's half, the ability to create a clear goal-scoring chance was missing.

In the 80th minute, Demir Advic tried to find a way around Mason Robertson but was thwarted with ease. A minute later, Raju found himself in a good spot to grab an equalizer after a misplaced clearance, but his shot flew wide of the goal.

In the 84th minute, goalscorer Dicka turned provider as he played a through ball for substitute Ralte, who slotted home from inside the box to double Real Kashmir's lead.

Real Kashmir held on to their two-goal lead and saw the match off to register their first win of the Hero I-league season.

NEROCA, TRAU play out 1-1 draw in Imphal derby of I-League

NEROCA FC were held to a 1-1 draw by Tiddim Road Union Athletic (TRAU) in their opening match of this year's Hero I-League in Kalyani.

Varun Thokchom's 10th-minute strike was cancelled out by Joseph Olaleye's 15th-minute header as both the teams shared points in the Imphal derby.

As early as in the sixth minute, TRAU created the first goal-scoring chance of the match when Komron Tusirov ran clear of his marking defender onto goal. The Tajik forced the opposition custodian to make a good save from a tight angle.

Four minutes later, with their first shot on target NEROCA took the lead.

A defensive lapse left a huge gap between the two central defenders and Varun Thokchom ran into the vacant space to receive a cross from the flank. The nimble-footed forward made no mistake and slotted past the TRAU custodian to give NEROCA the upper hand in the derby.

The lead, however, was short-lived. In the 15th minute, Joseph Olaleye's thunderous header off a Komron Tusirov corner kick grabbed the equaliser for TRAU.

With end-to-end action ensuing for much of the first half, NEROCA were provided opportunities to go ahead.

In the 30th minute, Songpu Singsit's long shot from outside the box flew narrowly past the goal and seven minutes later Khanngam Horam missed a sitter after he skewed his shot wide with only the goalkeeper to beat.

TRAU's forwards seemed to run out of steam as they were thwarted with ease by the NEROCA defence and both teams went into halftime tied at 1-1.

TRAU started with an attacking and positive intent in the second half. In the 58th minute, goalscorer Joseph Olaleye had a great opportunity to hand TRAU the lead but his effort from close range was saved heroically by the NEROCA custodian.

The tempo in the second half, after that chance for Olaleye, dropped significantly as both the teams played cautiously.

TRAU, with more shots on goal, tried to breach the NEROCA citadel but were held at bay.

Meanwhile, NEROCA tried to play on the counter-attack and catch their opponents off guard.

In the 70th minute, Songpu burst onto goal but a cracking tackle by the TRAU defense left him out of steam as the ball went out for a goal kick.