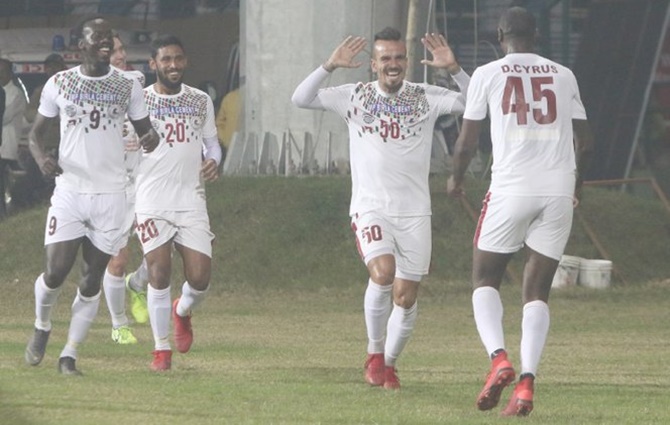 Kolkata giants Mohun Bagan are all set to merge with ATK in their bid to play in the country's top tier Indian Super League during the 2020-21 season.

While both Mohun Bagan as well as ATK brass remained non-committal, there remains a strong possibility that an announcement might be on cards by the end of this week.

"There is no confirmation as of now but we always have been in talks for future tie-ups. When something concrete develops we will come out with an announcement," Mohun Bagan senior official Debasish Dutta said.

ATK co-owner Utsav Parekh too remained non-commital of the development and said the organsiers, Football Sports Development Limited, are looking into this.

"Every three months, we have been hearing such speculations. Last we heard East Bengal will joining ATK and now it's Mohun Bagan. Let's wait and watch, FSDL are looking into the matter. They will have a final say."

As per the Indian football roadmap, the ISL will become the top tier league of the country and there's a key recommendation by the AFC is to open a pathway for two I-League clubs' entry into the ISL by the end of the 2020-21 season, subject to the criteria being fulfilled.

Aridane Santana and Xisco Hernandez Odisha scored a goal each in the second half as Odisha FC toppled Mumbai City FC 2-0 to make it three wins out of three at the Kalinga Stadium in Bhubaneswar.

After a barren first-half, goals from Santana (48') and Hernandez (74') were enough for Josep Gombau's men to floor Mumbai City who suffered their second consecutive defeat in the Hero Indian Super League.

The three points have taken Odisha's tally to 18 points from 12 matches. It sees Odisha surge into the top-four at the expense of Mumbai who are two points adrift.

The first chance of the match came the visitors' way in the 14th minute when Amine Chermiti fed Modou Sougou down the right side of the box. But no Mumbai player could turn his dangerous ball across the box.

Odisha continued to enjoy possession and threatened from wide areas. A corner in the 19th minute from Xisco sparked pandemonium in the Mumbai box, with Pratik Chaudhuri clearing the ball away after a bit of pinball in the box.

Odisha kept peppering the Mumbai box with crosses and corners, but apart from several half-chances, they could not force an opening.

There were a couple of close calls at both ends as the half wound down. Serge Kevyn's blocked shot fell for Sougou on the edge of the box. But his snapshot flew just wide in the 44th minute.

At the other end, a blocked cross from Xisco fell for Nandhakumar inside the box. He worked some space for himself and pulled the trigger, but the shot was straight at Mumbai custodian Amrinder Singh.

Odisha took lead three minutes into the second half after brilliant work from Xisco. The Spaniard got past Mato Grgic and found Santana with a cutback from the byline. The striker was left with the simple job of turning it in at the far post.

With confidence surging through, Odisha kept troubling the Mumbai defence and Xisco and Santana both saw shots on goal blocked away by desperate Mumbai defenders.

In the 56th minute, Amrinder was forced to keep his side in the game after Santana sent Jerry Mawihmingthanga through on goal. The winger's shot was brilliantly kept out by the Mumbai custodian.

In the 74th minute, Odisha made their dominance count with a second goal after Santana set up Xisco inside the box after winning a duel with Valpuia. Xisco made no mistake, smashing in a volley to make it 2-0.

A crestfallen Mumbai outfit could not muster any sort of comeback as Odisha registered a hat-trick of triumphs at the Kalinga Stadium.