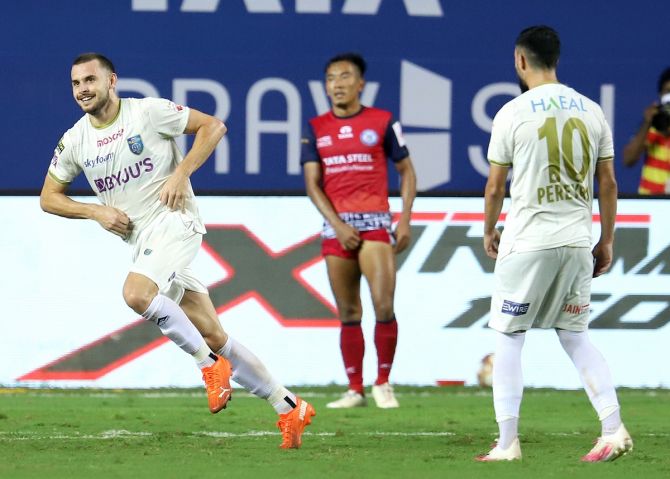 Kerala Blasters put up an inspired show to beat Jamshedpur FC 3-2 for their second win of the Indian Super League season, in Vasco, on Sunday.

Kerala Blasters took the lead through Costa Nhamoinesu (22nd) but his goal was neutralised by Nerijus Valskis (36th) before the half-time break. Jordan Murray then scored a brace (79th and 82nd) to hand Kerala three points.

Valskis pulled one back for Jamshedpur in the 84th minute.

Jamshedpur started strong and should have bagged the lead as early as the 4th minute after some delightful build-up play. Valskis did well to hold the ball and found Mobashir Rahman, whose cross found Jadhav but the youngster's effort deflected off the post.

Seven minutes later, Kerala got a gilt-edged opportunity which was the best chance of the opening half. Gary Hooper put Murray through on goal with a decisive pass that split open the Jamshedpur backline. But with only the keeper to beat, the Australian skewed his shot over the bar.

However, Kerala soon made amends for the early miss as they broke the deadlock from a set-piece. Facundo Pereyra swung a delicious cross into the box for Costa, who got ahead of Jamshedpur keeper TP Rehenesh and headed home.

Jamshedpur rallied soon after conceding the lead and would go on to restore parity from a set-piece after Lalruatthara fouled Alexandre Lima in a dangerous area outside the box. Valskis curled his free-kick over the wall and into the top bottom corner past Kerala custodian Albino Gomes, ending his three-match goalless streak.

Jamshedpur dominated proceedings after the restart, making constant raids into the opposition box but couldn't find a way. The best chances fell for Jackichand Singh, who struck the woodwork twice.

Kerala were reduced to ten men just after the hour mark after Lalruatthara was shown a second yellow card for a rash tackle.

But despite being a man down, two defensive errors from Jamshedpur helped Kerala gain an advantage. They took the lead from a set-piece.

After Jessel Carneiro's throw-in was cleared away poorly by Stephen Eze, Pereyra won the ball and tested Rehnesh from close range. The ball fell to Murray on the rebound and he scored a tap-in.

Valskis got on the scoresheet again to revive Jamshedpur's hopes of a comeback. The striker buried his header into the net from Mobashir's cross to cut short his side's deficit.

But in the end, his goal came a little too late as Kerala went home with the three points.

Odisha FC and Chennaiyin FC traded missed chances to play out a goal-less draw in their Indian Super League match, in Bambolim.

The match saw both teams failing to convert clear-cut chances. That Odisha had three shots on target while Chennaiyin managed just two exemplified how much both sides cancelled out each other.

Chennaiyin, the better side in terms of possession, though had a couple of chances to get a winner but their forwards were unable to convert them.

It was Chennaiyin who dominated the opening exchanges, creating multiple chances in the opening quarter. They had their first big chance during the second minute, but Rahim Ali failed to put his team ahead.

A long ball found him through on goal with only Odisha keeper Arshdeep Singh to beat. But his final touch was too heavy and allowed Arshdeep to come out and smother the ball.

In the 14th minute, Lallianzuala Chhangte received the ball from Anirudh Thapa and drilled in a low shot, but it only struck the side netting.

The first half got increasingly aggressive with both teams committing a number of fouls. Chennaiyin earned two yellow cards with Enes Sipovic and Jerry Lalrinzuala going into the referee book.

Odisha thought they had the lead as the first half drew to a close. Diego Mauricio headed in a cross from Cole Alexander, only for the linesman to signal for offside.

Just after that, Jakub Sylvestr had a great chance to find the opening goal. Reagan Singh found him in the box and Sylvestr was able to direct it towards the post, only for Arshdeep to pull off another vital save.

The Odisha keeper was in top form throughout the first half and was a major reason why both teams went in goalless at the break.

The second half started with Chhangte getting in behind the Odisha defence yet again and finding the side netting for the second time.

In the 71st minute, Ali wasted another great chance. A mistake by Steven Taylor left the youngster with only Arshdeep to beat again. This time he managed to do that but struck his shot against the post.

The last ten minutes of the game was mostly played out in Odisha's half as Chennaiyin pushed for a winner. However, the Odisha defence stood firm.

Bernardez struck in the 35th, 58th and 69th minutes while Majcen was on target in the second and 75th minute.

The All India Football Federation's developmental side scored through Vanlalruatfela Thlacheu (9th) and Gurkirat Singh (21st).

Churchill Brothers took the lead in the second minute itself. Luka Majcen's header found the back of the net after a strong shot ricocheted off the crossbar and fell his way. The early setback, however, did not deter the young Arrows.

The Arrows got back into the game, playing free-flowing attacking football. Their efforts bore fruit in the ninth minute when Vanlalruatfela found the target.

In the 21st minute, Gurkirat Singh was brought down inside the box and the forward himself scored from the spot-kick to give Arrows the lead.

With Indian Arrows scoring two goals in the space of 15 minutes, Churchill tried to soak up the pressure by playing a deep backline.

The Arrows' attacking spell was, however, halted in the 35th minute when Clayvin Bernardez headed home after a cross from the left flank found him inside the box.

Churchill Brothers started to batter the Indian Arrows defence in the second half with Luka and Bernardez's physical prowess giving the young Arrows defenders problems.

In the 59th minute, the pairing combined and Bernardez's powerful shot from the edge of the box left the Arrows custodian stunned as Churchill once again took the lead.

The Goan side extended their lead in the 69th minute. Bernardez found the back of the net once again, this time with a thumping header off a corner kick.

The Arrows tried to reduce the deficit but to no avail. Churchill Brothers put the match beyond Arrows' reach in the 75th minute when Luka's header from a free-kick crashed into the back of the net to give his side a three-goal lead.

Tiddim Road Athletic Union's (TRAU) Tajik recruit Komron Tursunov made history by scoring I-League's fastest goal ever in the ninth second to help his side eke out a 1-1 draw against Real Kashmir FC, in Kolkata.

Tursunov bettered the earlier record in the name of Katsumi Yusa who scored a 13th-second goal for NEROCA FC against Churchill Brothers in the 2018-19 season.

The Tajik international's strike, however, was cancelled out by Mason Robertson's 70th minute header at the Mohun Bagan Ground.

Tursunov's curling effort from outside of the box found the back of the RKFC net, leaving the opposition in utter disbelief. The sheer suddenness of the goal left Real Kashmir FC in disarray as TRAU dominated the opening exchanges.

Real Kashmir fought back and in the 22nd minute, Mason Robertson's effort from a freekick came close to grabbing the equaliser.

Since then, it was TRAU dominating possession though the Snow Leopards had the lion's share of goal scoring chances.

In the 25th minute, Dipanda Dicka tried to find the back of the TRAU net after his swift effort inside the box was saved.

The best opportunity for the Snow Leopards fell to Lukman Adefemi in the 37th minute but he missed a free-header inside the box with only the opposition custodian to beat.

Despite TRAU's possession, chances came were rare and far between for the club from Manipur. They had a golden opportunity to double their lead in the 58th minute when Komron was put onto goal by a swift counter-attack.

After turning his marking man inside out, Komron could only test the keeper into making an easy save, as the Snow Leopards survived.

Sitting deep and hitting on the counter-attack, TRAU committed bodies into defence in an attempt of holding on to their lead.

In the 70th minute, Mason Robertson found the equaliser for Real Kashmir after his thumping header off a Ralte freekick found the back of the net. The equaliser spurred the Snow Leopards as they searched to take the lead but to no avail.