Young shuttler Sourabh Verma created the biggest upset of the day when he sent Athens Olympics bronze medallist Sony Dwi Kuncoro packing in straight games in the first round of the Indian Open Super Series in New Delhi on Wednesday.

Currently ranked 37th, Sony had also won the silver and bronze in the World Championship in Kuala Lumpur in 2007 and Hyderabad in 2009, besides winning the Indonesian, Japan Super Series and China Masters.

"It is my biggest win. I wasn't intimidated by his stature. I just wanted to give my best and see how things pan out and I am glad, I could pull off the victory," said Sourabh, who is playing the first Super Series of his career.

He will take on the winner of match between seventh seed Kenichi Tago of Japan and French Brice Leverdez in the second round tomorrow.

The Madhya Pradesh lad have been training in the Gopichand Academy for the last two years and is among the talented group of young shuttlers.

"I have been training At SAG (Special Area Games) but the training facilities were not that great. After I moved into the Gopichand academy for the Commonwealth Games camp, I decided to stay there ever since," said Sourabh, who reached the semi-finals of the National Championship in Rohtak.

Sourabh won the All India Senior Ranking tournament held at Atul, Gujarat in February. This was his first major ranking title on the senior circuit. He also reached the quarter-finals of the Scottish Open in 2009.

Meanwhile, Ajay Jayaram too produced a gallant performance against world number one Lee Chong Wei of Malaysia before going down fighting 21-19 21-18 in a 37-minute match.

"It was my first match and I was taking things a little lightly, playing different strokes but I didn't except him to play so well. I was trying a few things, taking a feel of the stadium. A few line calls went against me but in the end it was a fair and square match," Lee said.

Disappointed to end up on the losing side after leading 18-15 in the second game, Jayaram said he is planning to balance tournaments with proper rest so that he can peak at the right time and qualify for the Olympics.

Among other Indians, Akshay Dewalkar and Pradnya Gadre beat Japanese pair of Noriyasu Hirata and Miyuki Maeda 21-17 21-17 in the mixed doubles category but their colleagues were not so lucky as they crashed out of the tournament with contrasting defeats.

Eighth seeds Shintaro Ikeda and Reiko Shiota of Japan were too hot to handle for Arun Vishnu and Aparna Balan as the Indian pair's fight ended with an 18-21, 21-17, 14-21 defeat in another mixed doubles category. 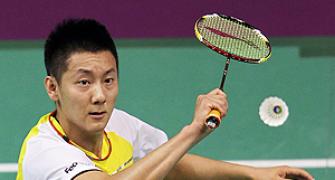 Lin Dan breezes into 2nd round at Badminton Worlds