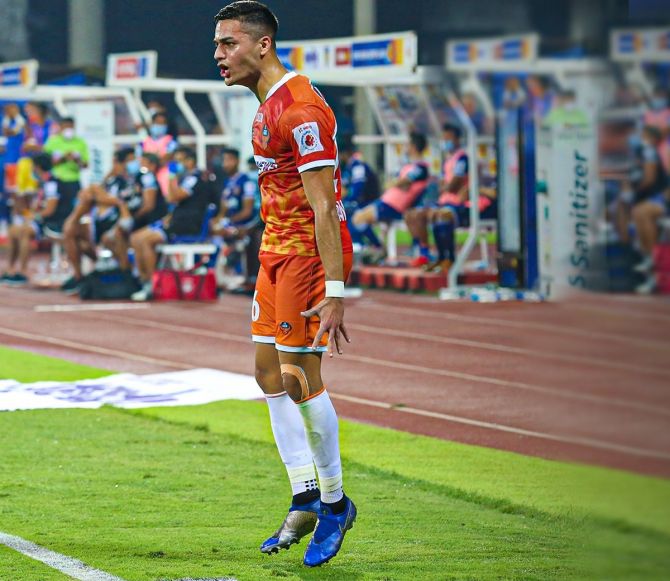 An injury-time strike by young Ishan Pandita helped FC Goa play out a 2-2 draw against Chennaiyin FC in an Indian Super League (ISL) match, in Bambolim, on Saturday.

The draw, Goa's sixth on the trot, helped the Gaurs climb to the third spot on the table.

While Pandita and Igor Angulo scored for Goa, Jakub Sylvestr and Lallianzuala Chhangte found the net for Chennaiyin.

It was Chennaiyin who started stronger but failed to take advantage of a couple of early chances. Just when it looked like their profligacy in front of goal was going to cost them, Chennaiyin took the lead.

It was Reagan Singh who paved the way for the goal with some great work down the right wing. He found Sylvestr through an army of Goa defenders, who took a couple of touches before producing an excellent finish despite losing his balance and going to the ground.

Chennaiyin's lead lasted less than six minutes as Goa went looking for the equaliser and were awarded a penalty. Eli Sabia, while rivalling Angulo to get to a cross only managed to do so with his hand and the referee promptly pointed to the spot.

There was some drama as Angulo slotted home the penalty only for the referee to order him to retake it. But the Spaniard made no mistake the second time as he dragged his team back to level terms.

Despite conceding, Chennaiyin mustered up enough resolve to go on the attack again and it was them who created the better chances in the first half. The best of them came right before the half time whistle as Sylvestr hit the woodwork, despite only having Goa keeper Dheeraj Singh to beat.

Chennaiyin's endeavour yielded fruits in the second half as they regained the lead. But the goal did not make for good viewing for Goa fans as it came from confusion between Dheeraj and his defenders.

The young keeper came out for the ball only to run into one of his defenders. The ball found its way to an unmarked Lallianzuala Chhangte who made no mistake from close range.

It looked like Goa would rue that mistake as the match progressed into injury time without them looking like finding an equaliser. However, then came Pandita with his late goal, something he has a knack for.

Powered by Lukman Adefemi's fine hat-trick, Real Kashmir FC pulled off a 4-3 victory over NEROCA FC in the highest scoring game of this I-League season so far in Kalyani.

Real Kashmir FC rode on Adefemi's triple strikes (9' 24' 63') to defeat the Manipuri side in a topsy-turvy match that saw NEROCA equalise after falling behind by two goals, only for Adefemi's stunner in the second half to steal the show and hand three points to the Snow Leopards.

Real Kashmir had taken what seemed to be an unassailable lead, courtesy of two goals by Adefemi in the first half, coupled with a Robertson strike. But NEROCA fought back through Kallon, Lhungdim and substitute Singsit.

Disappointingly for Gift Raikhan's men, Adefemi's strike in the second half proved to be the difference between the two sides as Real Kashmir went second in the I-League with 13 points -- one behind league leaders Punjab FC -- who have also played a game more.

Though it was Real Kashmir FC who started the party when Adefemi latched on to a pass inside the box and headed home from close range to give the David Robertson-coached side a solitary goal advantage.

Long balls seemed to be NEROCA's area of concern and their defense, on multiple occasions, fluffed their clearances, only for goalkeeper Bishrojit Singh to keep them in the match.

In the 22nd minute, Danish Farooq was brought down inside the penalty box by a heavy Deepak Taklembam tackle and from the spot, Adefemi made no mistake in slotting the ball in to double the Snow Leopards' lead.

The first 25 minutes of the match belonged to Real Kashmir.

With Real Kashmir dominating possession, NEROCA had a rare chance, and they made the most out of it. In the 29th minute, defender Varney Kallon connected from a Subash Singh corner kick and thumped his header into the back of the net to halve the deficit. However, there was more to the script.

In the 35th minute, Robertson did exactly the same, albeit from a free kick. A long Sena Ralte free-kick found the defender inside the box and Robertson made no mistake in flicking the ball home.

In added time at the end of the first half, NEROCA once again minimised their deficit.

Spurred by the late goal, NEROCA started the second half on an attacking note.

The Raikhan-coached side started to press higher up the pitch and man-marked the opposition forwards in an attempt to quell long balls. Their effort reaped dividends after the introduction of Singsit.

In the 57th minute, a beautiful pass from Judah Garcia carved open Real Kashmir FC's defence line and found Singsit racing towards the goal. With only the opposition custodian to beat, he showed great composure to slot the ball home and restore parity at 3-3.

The very next minute, Singsit was once again found inside the box by Garcia, but this time, his attempt followed a good save by the opposition goalkeeper Mithun Samanta.

After the hour mark, there was another twist in the tale.

In the 63rd minute, Adefemi completed his hat-trick after he latched on to a through-ball from the mid-field and fired it from outside the box with his left boot to hand the lead back to the Snow Leopards.

RKFC held on to that lead to emerge winners and move up the I-League standings.

Gokulam Kerala FC kept alive their hopes of finishing in the top half of the I-League table before the next round by defeating high-flying TRAU 3-1 in Kolkata.

An Emil Benny master-stroke (16th minute) in the first half coupled with Sharif Mohammad's (57th) and Zodingliana Ralte's (86th) second-half strikes led the Vincenzo Annese-coached side to an easy win.

Komron Tursunov (87th) pulled a goal back for TRAU in the dying moments of the game.

Gokulam played their usual style of football by keeping possession and rotating the ball on the flanks from the very start of the match.

Crosses into the box for Dennis Antwi and Philip Adjah became a common sight as the Malabarians tried to take an early lead. In the eighth minute, Naocha Singh's cross was plucked from the air by Dennis Antwi, but goalkeeper Amrit Gope made an astounding save to keep TRAU's clean sheet intact.

With quick play around the box, Gokulam tried to unlock the opposition defence. While doing so, they were exposed to counter-attacks, a speciality of TRAU.

In the 12th minute, Joseph Olaleye's cross from the right flank fell to Bidyashagar Singh outside of the box. The midfielder, however, tried to attempt the spectacular, hitting it the first time, but failed to test the opposition goalkeeper.

Where TRAU failed, a moment of magic for the Malabarains made them succeed four minutes later.

Vincy Barreto's cross from the right flank found an onrushing Emil Benny inside the box. Benny volleyed it first time into the back of the net to give Gokulam the lead.

Although TRAU lacked creativity up front and Tajik forward Tursunov was isolated on more than one occasion, the best chance for them came in the 35th minute when Kishan Singh's freekick found Shahbaaz on the far post.

Shahbaaz pulled the ball back for the TRAU attack force to take advantage, but neither Tursunov nor Bidyashagar were around to tap home from close range.

Gokulam were provided a golden chance to double their lead going into half-time but Dennis Antwi's effort rattled the post and went out in the 38th minute after he was found by a long ball. The half-time score read 1-0 in Gokulam's favour.

TRAU were dealt another blow in the 57th minute when Sharif Mohammad was found unmarked inside the box after a Dennis Antwi flick-on from a corner kick found him inside the box. With ample space and time, Sharif fired from close range into the back of the net to double the Malabarians' lead.

Meanwhile, TRAU seemed to suffer from complacency in defending, and on more than one occasion, almost gifted their opponents another goal. Upfront, chances for TRAU became rare as Tajik import Tursunov was unable to connect with the midfield.

In the 70th minute, Philip Adjah latched on to a long ball from the midfield and tried to chip the opposition goalkeeper. Amrit Gope, however, read Adjah's intention and made a save to keep TRAU from falling three goals behind. Frantic minutes of play were witnessed next.

In the 86th minute, Zodingliana Ralte bundled home his chance from close range after Dennis Antwi was brought down inside the box, to give Gokulam Kerala FC a three-goal advantage.

Immediately in the very next minute, TRAU pulled a goal back as Tursunov's shot from just inside the box whizzed past the opposition custodian and crashed into the net.

Punjab FC moved to the top spot in the I-League standings after notching up a comfortable 2-0 victory over Chennai City at the Kalyani Municipal Stadium in Kalyani.

With the result, the Punjab side have now displaced Churchill Brothers on the summit of I-League points table with 14 points from eight outings -- one point ahead of the Red Machines, who have played one game less.

The game opened with fast end-to-end football, but both sides were unable to get their efforts on target.

Punjab created the first big opening of the game in the 18th minute. Chencho flicked a long ball over his marker and forced a brilliant save from Chennai City's Kabir Toufik.

Punjab kept pushing and reaped rewards in the 43rd minute. Souvik Das' cross found Diawara just outside the six-yard box. The Senegalese held off a challenge from Tarif Akhand and volleyed his effort past a stranded Toufik.

Chennai City sought an immediate reply through a free-kick. Substitute Elvedin Skrijelj's cross from distance was met by Demir Avdic, who yet again failed to hit the target. As a result, Punjab went into half-time with a 1-0 lead.

Punjab went in search for the second goal early in the second half and were close to finding it a minute after the restart. Toufik failed to hold on to RV Horipam's flicked header from a long throw, causing chaos in the box. Luckily for him, his defence was there to bail him out.

On the other end, Chennai created a rare opportunity to equalise in the 59th minute. Demir Avdic won the ball off a defender before breaking in the box and sending a bullet strike towards goal. However, Kiran Kumar produced a magnificent save, ensuring his side's lead was safe.

With their lead intact, Punjab FC kept attacking and came close again in the 84th minute. Diawara latched on to Beitia's corner, but his header went over the goal. It did not matter much though, as finally, Curtis Fleming's team scored four minutes later.

Aphaoba Singh broke on the counter, latching on to a long pass from Beitia before sending in a dipping shot. Toufik saved the shot but sent the rebound into the path of substitute Rupert Nongrum, who made sure he remained onside and duly put the ball into an empty net.