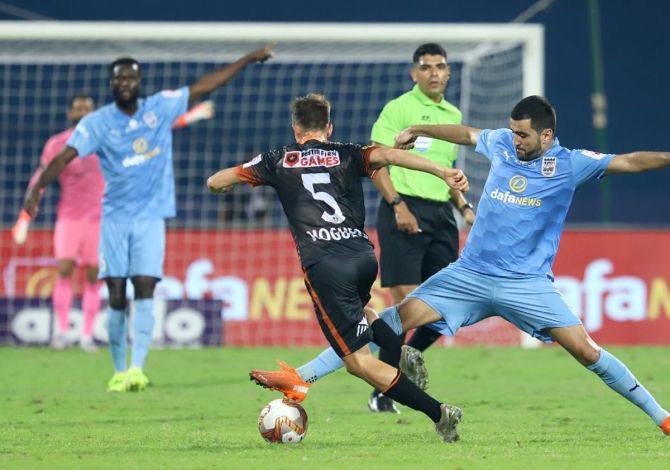 A stoppage-time goal by Ishan Pandita helped FC Goa pull off a thrilling 3-3 draw against Mumbai City FC in an Indian Super League match in Bambolim on Monday.

But just when it looked like the match was heading for a draw, Rowllin Borges struck late (90th minute) to put Mumbai ahead only to see his effort cancelled out by Pandita in the dying moments of the game. This is Pandita's second stoppage time strike in the league.

FC Goa are now on a nine-game unbeaten run.

Goa dominated the match in terms of possession and passing but Mumbai's defense stood tall denying the Gaurs.

Despite only completing half as many passes as their opponents, Mumbai still managed to walk into the breather with a one-goal cushion. Sergio Lobera's team relied on counters and had more shots on target. They had four on target of which they converted two.

Boumous was full of life against his former team and fired an early warning when he raced past Adil Khan on the right, and attempted to cut the ball back. But Dheeraj Singh got a firm hand on the ball.

But the Frenchman put his team ahead, scoring from a quick counter in the 20th minute. Goa were on the attack but Edu Bedia lost the ball to Raynier Fernandes. After the ball fell to Le Fondre, the Englishman released Boumous into acres of space. Boumous took the ball around Dheeraj to score into an empty net.

Le Fondre doubled Mumbai's tally courtesy poor defending from Goa. Bipin Singh sent in a curling corner at the far post where Hernan Santana headed towards goal. But an alert Dheeraj managed to keep it out only to see the rebound headed into goal by Le Fondre for his ninth goal of the season.

Glan scored a stunner to reduce the deficit before the break. Jorge Ortiz played a pass to Glan at the halfway line and the new signing, who was making his first start for Goa, fired a thunderbolt which crashed into the Mumbai net.

Goa came out stronger in the second session and restored parity soon. Alberto Noguera whipped in a cross from the left to find Angulo, who managed to time his run perfectly to beat the offside trap and score.

After missing a couple of sitters, Borges finally scored in the 90th minute when he guided in Ahmed Jahouh's free-kick from the left. But there was still time left for another goal. Goa scored a stoppage-time leveller through Pandita who headed in Bedia's cross.

Table-toppers Churchill Brothers were held to their third successive draw in the Hero I-League 2020-21 after the Red Machines were stopped in their tracks by Real Kashmir FC in a goalless draw in Kolkata.

This was the first-ever official football game played at the Kishore Bharati Krirangan.

The top of the table clash was certainly embedded with fireworks right from kick-off as neither team held back in the opening minutes of the match.

Real Kashmir FC started strong and their direct, high-pressing style of play early on overwhelmed the Churchill Brothers' defence. Lukman Adefemi had an opportunity in the fourth minute to head the ball towards goal but could not test the opposition custodian.

Churchill Brothers, playing second best to Real Kashmir for the first ten minutes, had their moments later and could have possibly gone in front, much against the run of play in the 12th minute.

A delightful counter-attack by the Red Machines saw Hafis Mohammadali run straight onto goal. With only the opposition custodian to beat, his shot earned a heroic save from Mithun Samanta as Real Kashmir survived the scare.

The chance seemed to boost the Red Machines' confidence as the Fernando Varela-coached side used the flanks to conduct their attacks. In the 19th minute, Shubert Periera tried his luck from distance but could only shoot over the bar. Although Real Kashmir had the majority of possession, the Snow Leopards lacked creativity up front and long balls in the box were easily cleared by the Red Machines' defence line.

In the 32d minute, Shilton Paul was called into action when Farhan Ganai's swirling shot on the turn, from distance, was kept out by him after Real Kashmir committed bodies in attack courtesy of a long Haroon Amiri throw-in.

Churchill Brothers tried to take the lead through Hafis once again in the 41st minute, but this time as well the forward could not find the net and shot over the bar. He was found by Luka Majcen inside the box after the Slovenian had held on to a long ball.

With neither team able to better the other, the half-time scoreline read 0-0.

Real Kashmir FC came on spurred in the second half and had a golden opportunity to take the lead in the 48th minute. Haroon Amiri's classic long throw-in was flicked on by Danish Farooq towards the far post. The ball fell to Dipanda Dicka, who hit the side-netting from close range.

In the 65th minute, Churchill Brothers survived another scare. Danish Farooq's perfect through-ball from the flank for Dipanda Dicka speared through the defence and the goalkeeper.

However, had Dicka timed his run better, he could have just tapped in to give the Snow Leopards the lead.

Although Real Kashmir had the better of Churchill Brothers in the second half and created clear goal-scoring opportunities, the Snow Leopards failed to convert their opportunities.

League top scorer Clayvin Zuniga came on in the 70th minute as a substitute and looked dangerous but could not test the rival keeper.

In the end, though, David Robertson's team had only themselves to blame for missing easy chances, as the full-time scoreline read 0-0.

For Gokulam, Sharif Mukhammad's long-range strike late in the game only proved to be a consolation.

The Black Panthers broke the deadlock in the 41st minute when Faisal Ali received the ball outside the opposition penalty box and released a through-ball for Chidi, whose powerful shot gave his team 1-0 lead.

The match was sealed in the 67th minute when Sebastian Thangmuansang stretched in order to intercept Gani Ahmmed Nigam's dipping cross from a left flank free-kick.

But, all he did was set the ball perfectly into the path of Asheer Akhtar, and the defender made no mistake in putting it past Ubaid in the Kerala goal.

Sharif pulled one back for Gokulam Kerala in the 76th minute when Dennis Antwi provided a cut-back for Sharif. The Afghan defender then unleashed a curling long-ranger to beat Roy and give his side a ray of hope.

Gokulam are placed 8th with 7 points from six games. 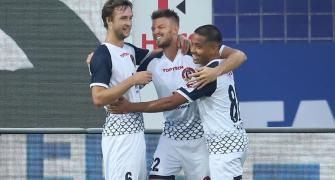 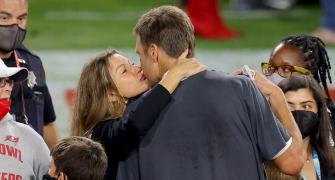 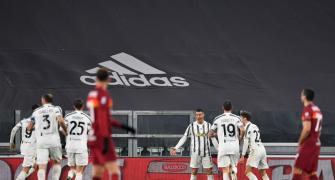 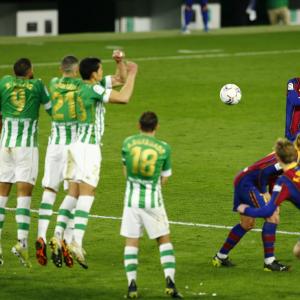 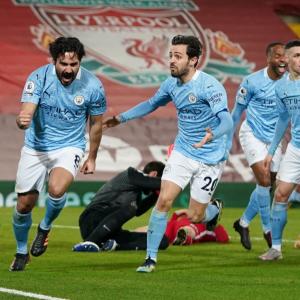