Left to themselves to find the resources to participate in next month's Asian Junior and Cadet Championships in Thailand, the Indian fencers finally managed to raise funds and will now take part in the event under Fencing Confederation of Asia (FCA) banner.

The Indian fencers have been disallowed to take part in the March 2-11 Asian event under the national flag following the Indian Olympic Assocation's ban by IOC in December last.

The fencers were, however, allowed to take part in the Asian event under the foreign banner.

Despite that, the participation of Indian fencers was in doubt as government funding was not forthcoming as they would not represent the country. The national federation also lacks resources as it is not getting government funds after the sport had been relegated to the 'other' category. 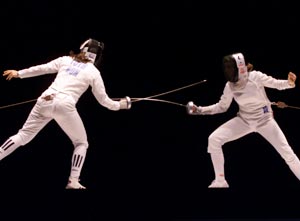 But far from being disappointed, the fencers searched relentlessly for individual sponsors and with some money from their own pocket they have culled in the required amount to take part in the event.

FAI secretary Sanjay Pradhan said that he has sent the entries to the event organisers after the fencers have informed him that they have collected enough resources.

"The organisers as a special case has given us extension of deadline to send the entries as they know our predicament. We have told the fencers that the FAI has no money and they have to arrange money for themselves. Now they have informed us that they have the funds now," Pradhan said.

Kerala-based fencing coach Sagar Suresh Lagu confirmed that his wards have raised funds from individual sources and from own pocket and they are taking part in the Asian event.

"Eleven Kerala fencers were to take part in the event and out of that eight are from SAI Centre Kannur under my charge. Six of my wards -- all girls -- have raised funds from local individual sources and with money from their own pockets they have got enough money for the Asian event," said Sagar, adding that each fencer would require Rs 80,000 to 85,000 to take part in the event.

"We have written to SAI and Kerala government also but we have got any response. Perhaps it could be because the fencers are not representing the country. We are still trying for the remaining fencers. But those who have got the money are taking part," he said.

Even in normal times, the fencers have been given help on case by case basis as the Fencing Association of India does not get government grant now.

"SAI had provided us the fund in 2010 and 2011 in an Asian event and Commonwealth event where my wards had done exceedingly well by winning medals. This time we are not getting anything," Sagar said.

He said the fencers would be leaving the country on February 28.

Pradhan, on the other hand, said that the International Fencing Federation has assured that FAI's suspension would be lifted soon but that can happen only by a decision of its Executive Committee and its meeting is coming up only in April.