They were at the forefront of pursuing glory for the nation as athletes and now some Indian sporting heroes are playing a key role in the raging battle against the COVID-19 pandemic -- manning the streets as police officers persuading people to stay home amid a national lockdown.

T20 World Cup-winning cricketer Joginder Sharma, Commonwealth Games gold medal-winning boxer Akhil Kumar and Asian Games champion kabaddi player Ajay Thakur have one thing in common. They are all full-time police officers, jobs which they got thanks to their sporting accomplishments.

Sharma and Kumar, both Haryana Police officers and good friends, listed the challenges that come with 'doing duty' during an unprecedented crisis. 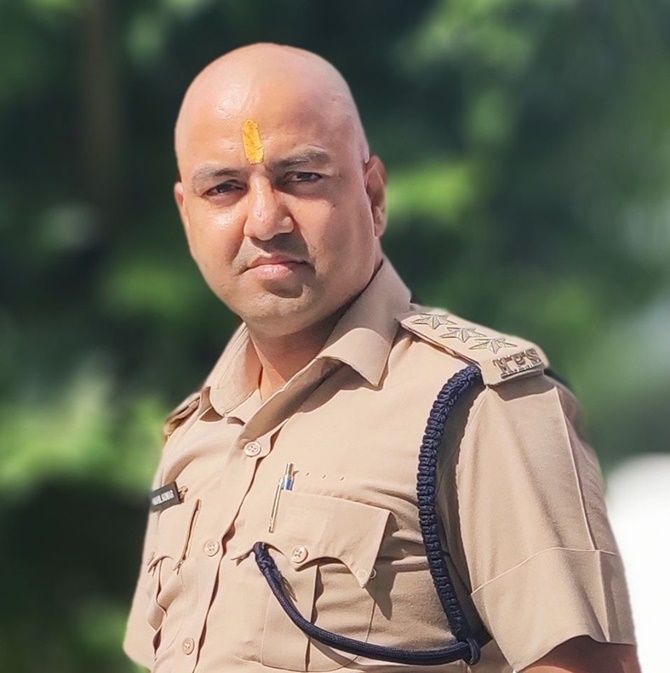 IMAGE: Akhil Kumar has been pooling money with his colleagues, including another boxer-turned-policeman Jitender Kumar, to buy essential food items and sanitizers for the underprivileged. Photograph: Akhil Kumar/Facebook

"I have been a DSP since 2007. This is one of a kind challenge for me as a police officer because of the general fear and I can tell you that I have seen quite a few challenges in my years of service," said Sharma, the all-rounder who immortalised himself with the trophy-winning final over against Pakistan in the 2007 T20 World Cup summit clash in South Africa.

The 36-year-old is currently posted in Hisar as the nation observes a 21-day lockdown till April 14 to combat the pandemic, which has killed more than 24,000 globally.

"Our duty time starts around 6 am and we do patrolling, making people aware, send those who are out for fun to their homes, help those in need of essentials or medical aid and take action against those who try to defy without any good reason," Sharma said giving a rundown of his average day.

Serving with the Gurugram Police as ACP since September last year is Kumar, the flamboyant bantamweight boxer, whose perilously low guard at the peak of his career became the style statement that many in Indian boxing continue to try and emulate.

"People are generally cooperative and in any case, essential services are being kept open so there is not much panic. I believe only a strict enforcement of lockdown will be able to halt this virus. People are slowly understanding this," said the 2006 CWG gold-medallist, who turned 38 on Friday, a working birthday for him.

The two-time Olympian and Arjuna awardee has also been pooling money with his colleagues, including another boxer-turned-policeman Jitender Kumar, to buy essential food items and sanitizers for the underprivileged.

Jitender, an Asian bronze-medallist, is posted in Rewari.

"We are trying our best. Those who can afford to stay inside can and must but there are those who cannot. Our effort is to ensure that we reach out to as many of such people as possible," Kumar said.

"Hum zameen se jude hain, humein pata hai bhookh kya hoti hai (We are people who have come up after lot of struggle, we know what it means to be hungry)," he added. 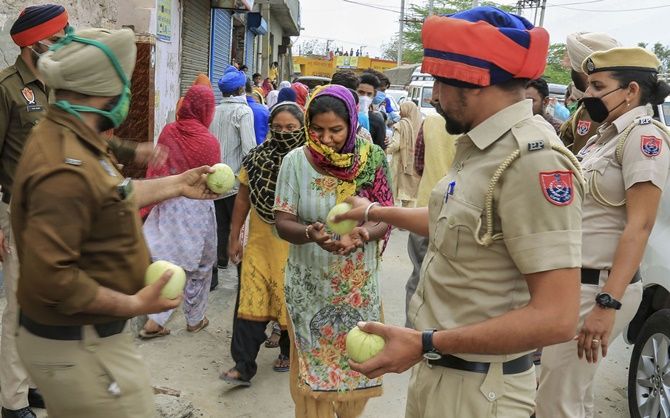 IMAGE: Police provide fruits and ration to poor people amid curfew due to the coronavirus pandemic, in Bathinda. Photograph: PTI

Thakur, who was bestowed the Arjuna award and the Padma Shri last year, is a DSP in Himachal Pradesh Police and has been in service since 2017.

The 2014 Asian Games gold-medallist was recently seen patrolling the streets of Bilaspur and has been raising awareness about the health crisis through video messages on his Instagram page, which has over two lakh followers.

While being on guard for others, these men in uniform also have to ensure that they remain safe themselves.

"...we carry masks, gloves and sanitizers for our own protection but for us the best protection is if people don't come out on streets unnecessarily," said Sharma.

"My family is in Rohtak, they are always worried for me. My wife and children call me all the time and talk about taking precautions. I salute my wife for managing the house at this time while I am here doing my duty," he added.

Sharma said he has been in Hisar for a few years now and his status of being a World Cup-winner comes in handy while counselling people.

"They respect me for my achievement and sometimes it helps my work when they see my nameplate. When I tell people to not crowd markets for cheap deals, they adhere. I tell them how costly it would be if they catch this infection, that they should not risk a deadly disease for saving a few bucks," said the former all-rounder.

Kumar, on the other hand, favoured tough action against wilful violators.

"There are some who genuinely don't know but there are others who come out despite knowing what it means. I think they should be dealt with sternly, that's the only language they understand," he asserted.

Sharma said most of such wilful violators are youngsters, complaining of boredom.

"I reach out to their parents. That's the best way to make them understand because they are a little unaware of the gravity of the situation," he said.

Being sportspersons, lessons in patience have been learnt aplenty and that helps them deal with the 'frustrations'.

"Sewa, Suraksha aur Sahyog (service, security and cooperation) is our force's motto. We are trying to deliver all," said Kumar.