India paid the price for unnecessarily losing their cool, as they suffered a humiliating 1-5 drubbing at hands of Malaysia, after playing with ten players for most of the match, in the Sultan of Johor Cup hockey tournament, in Johor Bahru, Malaysia, on Friday.

The defeat ended their hopes of a berth in the final.

India needed to win their last league match to reach the final, but with one player less from the ninth minute, coupled with a poor display, meant that the home side outplayed them in all departments of the game.

Malaysia, who needed a draw from Friday's match to qualify for the final, will take on Australia in the summit clash on Saturday, while India plays South Korea for the bronze medal.

Harpreet Singh struck India's lone goal in the 12th minute from a penalty-corner.

The Indians have themselves to blame for defeat as they failed to control their nerves.

Winger Talwinder Singh was red-carded in the ninth minute for hitting a Malaysian player, which meant that India had to play the remaining part of the match with 10 players.

Indian humiliation was complete when defender Harpreet Singh was shown the red card with just five seconds remaining on the clock. 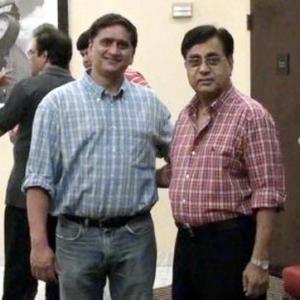 'My picture with late Jagjit Singh'