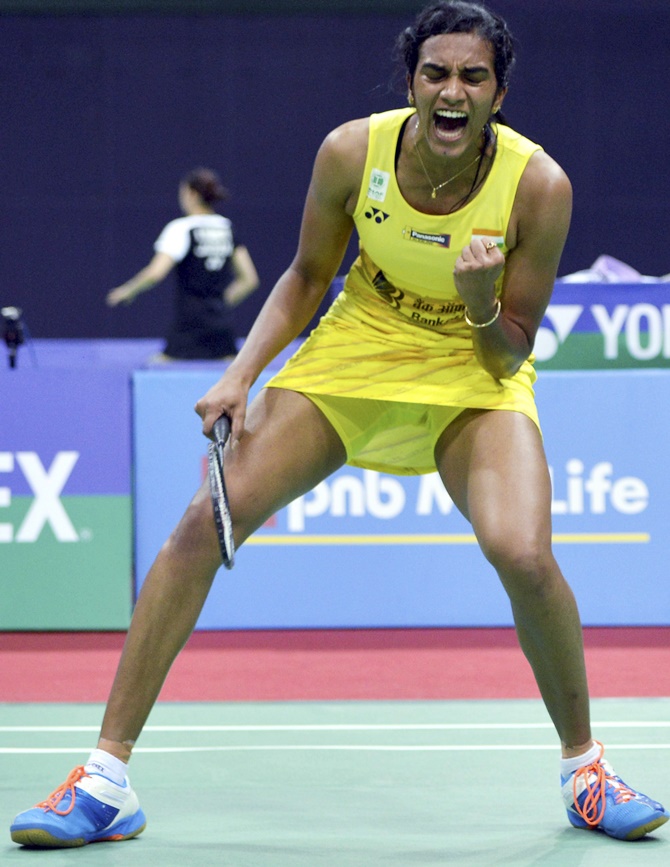 Olympic silver medallist P V Sindhu set up a summit showdown with Carolina Marin after a hard-fought win over World No 4 Korean Sung Ji Hyun in the semi-finals of the India Open Super Series, in New Delhi, on Saturday.

Cheered on by a sizable crowd at the Siri Fort Sports Complex, Sindhu dished out a superb performance to outwit the second seeded Hyun 21-18 14-21 21- in a battle of nerves, in which fortunes fluctuated.

Fans, who kept chanting 'Sindhu' and 'India' throughout the match, will witness a rematch of the Olympic final on Sunday.

Coming into the match with a 6-4 head-to-head record, Sindhu displayed nerves of steel and produced some scintillating low lifts.

“I was prepared from the start because it's always a long match. So, in the second game, I was leading 5-2 but made simple errors as I hit a mid court smash outside.

"From there she lead 11-6 and I tried, but she maintained the lead and finished it off," Sindhu said.

The two-time world championship bronze medallist added, "In the decider, I was aggressive from the start. I remember last time I made some errors and gave her lead.

"So, I was prepared from the first point itself. She came back in the third but I told myself if she can win so many points why can’t I and so I believed myself."

Talking about her final against Marin, Sindhu said, "At Dubai finals we played and I beat her but she defeated me at PBL but this time it will be at Delhi so I will have the support.

"But it will be a new game, new conditions, new style. She might know my game and I might know hers, we both will have this feeling that we won against each other. But it will be a fresh strategy, fresh game, so who plays best on that day will win. I just hope for the best."

Sindhu had clinched her maiden Super Series Premier title at China Open last year before reaching the final at the Hong Kong Open.

This season, she guided the Chennai Smashers to the title win at the Premier Badminton League (PBL). She started the new international season with a win at the Syed Modi International Grand prix Gold tournament at Lucknow in January.