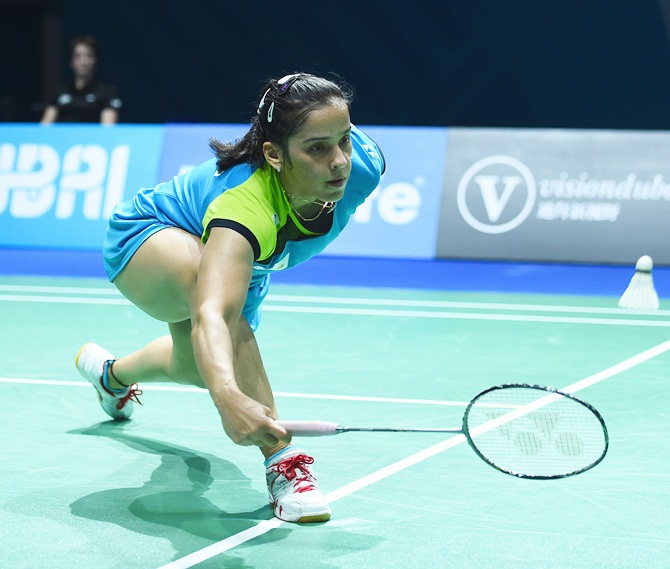 IMAGE: Saina Nehwal said she was 'anxious to finish off the match'. Photograph: Christopher Lee/Getty Images

Olympic medallists P V Sindhu and Saina Nehwal made a resounding start to their women's singles campaign but it was Sameer Verma who hogged the limelight with a stunning straight-game win over Korean Son Wan Ho in men's event in the opening round of India Super Series in New Delhi on Wednesday.

"I gifted her seven points, I was a bit anxious to finish the match. The score should have been 21-10, 21-10. She is a tricky player. She also plays doubles, so some of her strokes were difficult to gauge. I am happy with my movement," said World No. 8 Saina, who will face Thailand's Pornpawee Chochuwong next.

World No. 5 Sindhu, who will next take on unseeded Saena Kawakami of Japan, said: "It was a good match. It was close in the first game but I took a lead in the second early on. I am focused on the next game, taking one match at a time."

Sameer, who had clinched his maiden Grand Prix Gold title at Syed Modi International, shocked fourth seeded Korean Son Wan Ho 21-17, 21-10 in a 45-minute contest to set up a clash with Hong Kong's Hu Yun in the next round.

"Son was injured in All England. I was prepared and also saw a few videos. I played a lot of cross-court shots, he was finding it difficult to bend to retrieve the shots. His cross court is also strong. It is a good win but it is just first round so I need to capitalize on it. I need to be consistent," Sameer said.

It was a delightful day for the Verma brothers as Sameer's elder brother Sourabh also reached the second round with a 21-13, 21-16 win over compatriot H S Prannoy, who had his right knee tapped due to a freak injury at Swiss Open.

Sai Praneeth, finalist at Lucknow and who recently recovered from a shoulder injury, staved off a challenge from Japan's Kenta Nishimoto to win 16-21, 21-12, 21-19. He will play seventh seed Chou Tien Chen next.

Meanwhile, 2015 champion Kidambi Srikanth fought back from 1-8 down in the first game to eventually notch up a 21-19, 21-16 win over China's Zhao Junpeng. He will face Olympic bronze medallist Victor Axelsen next.

Ajay Jayaram gave a good fight before going down 21-23, 17-21 to third seed Viktor Axelsen of Denmark.

In men's doubles, it turned out to be a disappointing day as Vietnam Open winners Satwiksairaj Rankireddy and Chirag Shetty lost 14-21, 17-21 to Denmark's Kim Astrup and Anders Skaarup Rasmussen.