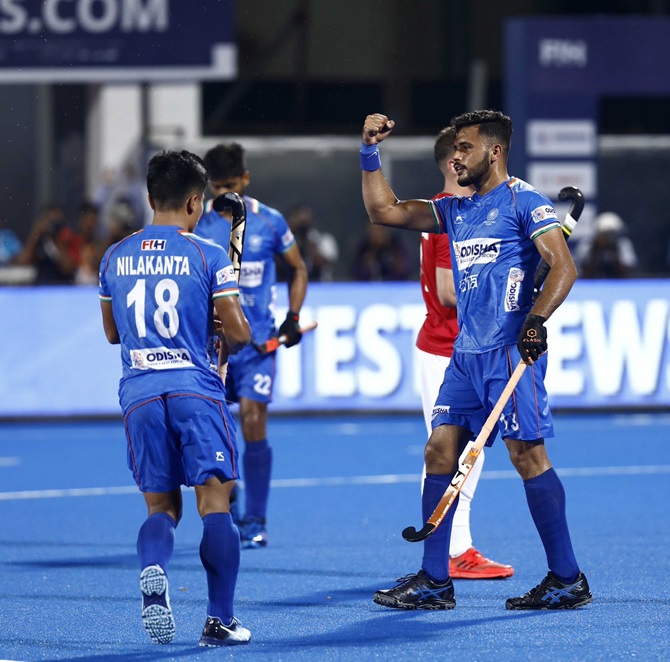 IMAGE: Harmanpreet Singh celebrates after scoring against Japan in the semi-finals of the FIH Series Finals hockey tournament, in Bhubaneswar, on Friday. Photograph: Hockey India/Twitter

India outplayed reigning Asian Games champions Japan 7-2 to storm into the final of the FIH Series Finals hockey tournament, in Bhubaneswar, on Friday, assuring themselves a place in the year end's Olympic qualifying event.

Returning to the side after a long injury lay-off, Ramadeep Singh (23rd minute, 37th minute) finally got his mojo back with a double strike, while Harmanpreet Singh (7th), Varun Kumar (14th), Hardik Singh (25th), Gursahibjit Singh (43rd) and Vivek Sagar Prasad (47) also registered their names on the score-sheet.

India will face South Africa in Saturday's final while Japan will square off against the United States in the third-fourth place play-off match.

South Africa had earlier defeated the US 2-1 in the first semi-final.

For the first time in the tournament, the Indian defence was literally tested as world No. 18 Japan did well in patches.

To the dismay of the home crowd, Japan took the lead in the second minute from a counter attack. Kitazato slammed home past India goalkeeper Krishan Bahadur Pathak after receiving a pass from Kenta Tanaka from their first attack.

The stunned Indians got their act together quickly and created a flurry of opportunities. Young Gursahibjit Singh was guilty of wasting a golden chance in the fifth minute from close range after he was beautifully set up by Nilkanta Sharma and Ramadeep.

The Indians kept up the pressure and earned three consecutive penalty-corners in the 14th minute and this time Varun beat the Japan defence with a powerful grounded flick to hand the hosts a 2-1 lead.

But the Japanese caught the Indian defence off-guard once again in the 20th minute with another fine counter-attack when Watanabe scored after being set up by Kazuma Murata.

Japan's joy was shortlived as India restored their lead three minutes later through Ramadeep, who scored his first goal for the country after returning from a year's injury hiatus.

Ramadeep scored with his trademark deflection from the near post after a  Gurinder Singh pass from the right flank.

Minutes later, India made the scoreline 4-2 when Hardik scored with a slap shot from the top of the D.

Next it was PR Sreejesh's turn to show his skills in goal and he denied Shota Yamada with a diving save from Japan's first penalty-corner.

After the change of ends, play was mostly confined to the Japan half as India kept up the pressure to score three more goals.

First Ramandeep scored his second of the day in the 37th minute with a rebound from a penalty-corner and then Gursahibjit and Vivek Sagar Prasad also sounded the board from field efforts to register an emphatic win for India.

The FIH Series Finals provide two spots in the Olympic Qualifiers, to be held in October-November this year.